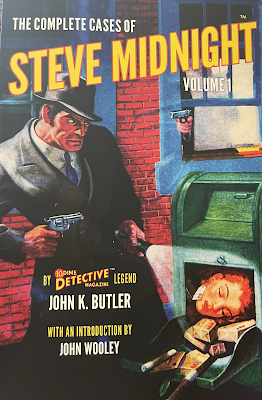 Before breaking into movies and television, pulp author John K. Butler (1908-1964) wrote nine novellas in Dime Detective Magazine starring a mystery-solving cab driver named Steven Middleton Knight, AKA: Steve Midnight. The stories have been collected into two attractive volumes by Altus Press, and I read the series debut, “The Dead Ride Free,” from May 1940.

Our narrator Steve Midnight was a wealthy playboy who lost it all during the Great Depression. He’s working as a cabbie for the Red Owl Cab Company in Los Angeles one cold night when a tall guy wearing a turban wants to be taken to Topanga Canyon. Steve immediately recognizes the fare as an old vaudeville magician named Zohar the Great. It’s been 20 years since Steve saw Zohar sawing a woman in half, and now he’s in the back of Steve’s taxi.

Zohar asks Steve to load a large parcel into the cab. After Steve agrees, he learns that the parcel is a locked coffin weighing about 150 pounds. Zohar explains that the casket houses a mummy from 1300 BC - a prop for his act. Upon arrival at Zohar’s shack, the magician offers to show Steve the mummy. However, upon opening the coffin, the men find the body of a freshly-dead woman with a dagger protruding from her chest.

For reasons best explained in the novella’s narrative, Steve is left to solve this mystery without the help of the police or the shady magician. There are some pretty cool curve balls thrown into the mystery’s plot, and Steve is a fine character to serve as our guide over the course of 50-pages.

Overall, “The Dead Ride Free” is a solid 1940s pulp mystery, but nothing earth-shattering, hardboiled or revelatory. I enjoyed the story and will revisit the collection when I’m in the mood for this particular flavor of comfort food.