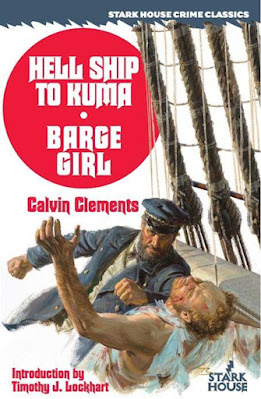 Stark House Press continues to reprint the original novels of New Jersey native Calvin Clements. During his life, Clements was in the Navy, served as a firefighter in New York City, and later perfected writing by contributing numerous scripts for television shows like Gunsmoke, How the West Was Won, and Dr. Kildare. Along with authoring short stories, he wrote four stand-alone paperbacks, two of which are paired together in a new Stark House two-in-one, Hell Ship to Kuma (1954) and Barge Girl (1953). I read and enjoyed Hell Ship to Kuma, as well as another of Clements' novels, Satan Takes the Helm (1952). Barge Girl was on my radar and thankfully has arrived in a gorgeous edition with an introduction by Timothy J. Lockhart (Smith, Pirates).

As a tugboat captain, Joe Baski tows barges around New York City. He's been on boats his whole life, including a sting as a quartermaster during WWII. But, his dream is to own a boat of his very own. Over the years, Baski has invested a few dollars every week to build what is ultimately a $50,000 boat. His next move is to quietly finish out his employment and then start his own charter business in the Florida Keys. Then came the “barge girl”, a married knockout named Stella.

When Joe first lays his eyes on Stella, he knows he must possess her. Stella's husband is much older, a weathered barge watchman that has become complacent with his boring existence. Stella wants more out of life, but feels an obligation to her husband. When she meets Joe, there is an instant attraction, a hot chemistry that refuses to burn out. Joe needs Stella for the next phase of his life and Stella wants to go, but is fighting an inner urge to be a devoted wife.

Without spoiling your enjoyment, Clements successfully combines a love story with a suspenseful death, set against the backdrop of the 1950s shipping business. Like his prior novels, Clements still offers readers technical lessons on freighters and barges, but it doesn't distract from what amounts to be a thrilling narrative as Joe and Stella wade the waters of seduction and deceit. Fans of police procedural novels may enjoy the book's finale, complete with a pesky and thorough insurance investigator.

Overall, Clements is simply masterful and remains one of the most frustrating authors of the mid 20th century. With only four novels to his name, readers deserved so much more than what he produced. Thankfully, I still have one more Clements novel to read, Dark Night of Love (1956) and at least 14 short-stories, all of which have been listed in the Clements bibliography at the back of Stark House's reprint.