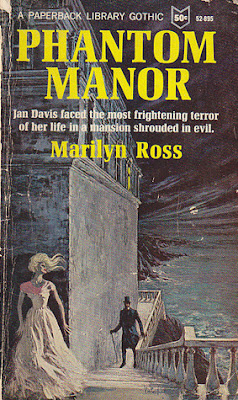 Author William Edward Daniel Ross (1912-1995) specialized in gothic paperbacks of the 60s and 70s. Using a variety of pseudonyms, the Canadian writer authored over 50 stand-alone gothics as well as an abundance of novels related to the television show Dark Shadows. My experience with the author is the gothic titles written under the pseudonym Marilyn Ross. After enjoying his 1965 novel Fog Island, I decided to read Phantom Manor. It was published just a year later by Paperback Library with the allure of another vulnerable beauty trapped in a mansion shrouded in evil.

Phantom Manor is set in the late 1800s and stars a Philadelphia woman named Jan. She finds herself financially strapped when her sick father passes away. Her immediate relative is a grandfather living in England, an aggressive man that had an estranged relationship with Jan's mother. Before Jan's mother died, she swore that she would never return to her family's fog-shrouded Phantom Manor. But, Jan wants to know more about her family and sends a letter to her grandfather explaining her father’s recent passing. Her grandfather responds with an urgent invitation for Jan to finally visit her family home.

The family's robust estate is a coastline manor situated on a small peninsula. When the tide rises, the only road leading from the estate to the village is enveloped in seawater. This is an important part of the book's finale and also lends some isolation to the book's narrative. Upon Jan's arrival at the manor, she discovers that her grandfather had died from health complications prior to her visit. She also learns that one of her uncles is now deceased and another has ran off to Australia chasing women and good fortune. He hasn't been heard from in decades and most fear he is now dead. Remaining is the estate's staff, the dead uncle's widow, her disabled son, and a distant cousin that serves as the manager of the manor. With no immediate relatives available, the grandfather named Jan as the sole heiress of Phantom Manor.

Jan learned that years ago (and recapped in the book's prologue) that her grandfather and a nearby monk order had feuded over land rights. It was rumored that the feud led to the death of a monk named Francis. Supposedly, Phantom Manor's third floor is haunted by the monk's vengeful ghost. Oddly, the estate staff has Jan's lodgings on the third floor. Needless to say, she's immediately attacked by this skeleton specter. Later, she falls to an unseen attacker in the house's wine cellar and is also nearly crushed by a large falling stone outside. After multiple attempts on her life, she begins to align herself with the family attorney. Together, the two suspects that the dashing and handsome distant cousin (the only family member remaining alive) could be the mysterious attacker (you think!?!).

Phantom Manor is rather dull with a bulk of the narrative spent on Jan's relationship with the distant cousin and her new role as the manor's sole heir – learning the staff, new instructions for the staff, fighting with the staff, firing the staff, etc. It's like reading a human resources guide on running a mansion. I didn't find any of it particularly spooky and mostly it was missing the atmospheric touches that made Ross's Fog Island work so well. I did enjoy the crime-mystery aspect of the book's closing finale, but I had already figured it out in the book's opening chapters.

Overall, there are hundreds and hundreds of these gothic paperbacks. There's no reason to spend any of your precious time reading this.