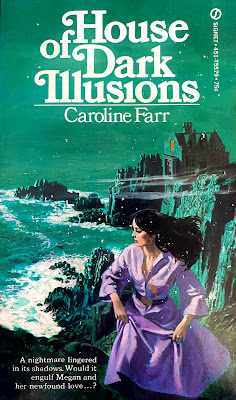 There are over 30 gothic novels authored by Caroline Farr between the mid-1960s and 1970s. Most of these books were originally published in Australia by Horwitz Publications and then reprinted in the US by Signet with vivid, traditional painted covers of beautiful women fleeing from gloomy mansions and castles. Depending on who you ask, the Caroline Farr name is a pseudonym for a revolving door of authors. The most consistent author associated with the Farr name is Richard Wilkes-Hunter, a New South Wales native that also authored books under pseudonyms like Alex Crane and Tod Conrad.

Another name associated with the Caroline Farr novels is that of Allan Geoffrey Yates, the popular author that became a household name by writing crime-fiction as Carter Brown. My sources close to the Yates estate confirm that he did author some Farr novels, but the titles are unknown. There is also another Australian author closely associated with the Farr name, Lee Pattinson. According to papers held by the National Library of Australia, Pattinson was employed as a writer with Horwitz and authored romance novels under names like Teri Lester, Noni Arden, Kerry Mitchell, and Caroline Farr.

The conclusion is that Caroline Farr was a house name used by at least three different authors that were published by Horwitz. Most recently, I gained a couple of these Signet reprints of Farr novels and I decided to try one out – House of Dark Illusions. It was originally published in 1973 and begins with a familiar gothic genre trope, a young woman learning of her inheritance.

In the opening pages of House of Dark Illusions, young Megan has just experienced the loss of her father. She's a student at Boston College and lives in an apartment on Boston's North Shore. With her father's death, Megan fears she won't have enough financial support to remain in college. Thankfully, Megan receives a letter from her Aunt Lissi with a tantalizing offer. Lissi invites Megan to the family's coastal mansion in Nova Scotia, Canada.

In the backstory, readers learn that Megan's mother is a descendant from a wealthy Canadian family. Unfortunately, she died when Megan was very young. The family never liked Megan's father so he left the family behind and raised Megan as a struggling single father in Boston. Megan debates returning to her childhood home, but feels that enough time has passed and it's important that she visit the only remaining family left, Aunt Lissie.

When Megan arrives at the spacious shoreline estate, she learns that her mother possessed telekinetic powers – the ability to move inanimate objects with her mind. Lissie feels that Megan has the same talents as well, but needs help discovering them. Lissie insists on having a séance so that Megan can harness her own hidden energy and possibly connect psychically with her dead mother. Additionally, the séance will include two distant cousins, a medium, and two doctors. But, when the séance begins, Megan begins seeing visions of an Indian prince being murdered in a palace. How does any of this connect to the story?

At 140 pages of large font, House of Dark Illusions reads more like a short story. There isn't really enough time to delve too far into these characters to properly introduce them. I felt the narrative was missing huge chunks of importance or simply shortened to meet a publishing deadline. The entire story does play out, including answers to Megan's questions about her family and inheritance, but it feels like a rushed job. The book's finale left something to be desired, but possessed a fitting conclusion to the average plot. Whoever crafted the book used foggy roads, the misty coastline, and the cavernous house as atmospheric plot enhancers, but even the spook factor wasn't enough to save the book. I'd recommend passing on this unless you really love the artwork of these old books and must possess everything. Otherwise, just move on to much better books.