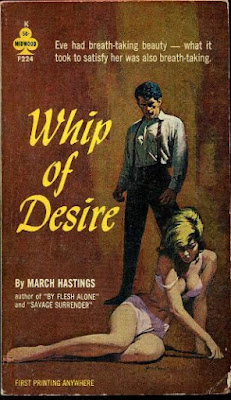 The book stars Fred Boyer, a 28 year old man originally from Alaska. He now lives in New York, plays the piano and has a pregnant wife named Mindy. In the opening chapter, Fred is at an employment agency hoping to find work. He's provided instructions to a theater ran by a gorgeous woman named Eve. Instantly, Fred and Eve connect and in a matter of days they establish a business that's funded by Eve's wealthy father. Fred will compose and perform music and Eve will put together a stage act.

Later, readers learn that Eve's father crashed the family plane years ago, an accident that killed Eve's sister and injured her. Eve feels she is somehow responsible for her sister's death and harms herself frequently – pain as her penance for surviving. As Fred soon realizes, Eve craves rough sex and demands to be dominated. Eventually, Fred's heated desires for Eve erupts in a frenzy of pleasure and pain. He's liberated from the financial stress of being a husband and an expectant father by forcefully taking Eve. She pleasurably gains the abuse she feels she deserves while he is freed from life's cumbersome shackles by becoming her lover. But, Fred learns there is another man in Eve's life, a man so abusive that he leaves Eve broken, bloody, and nearly dead.

As an intriguing romance novel of the 1960s, Whip of Desire introduces some surprising elements. Both Fred and Eve were dynamic characters and the story was serviceable enough. I think Singer is a terrific writer, but she really finds her element in the sex scenes. Her descriptions are never graphic, but really convey the emotions and physical collision between these lovers. Mindy's mistrust in Fred, Eve's backstory, the business venture, and Eve's domineering “other man” made for a propulsive, fully developed story that I found entertaining.