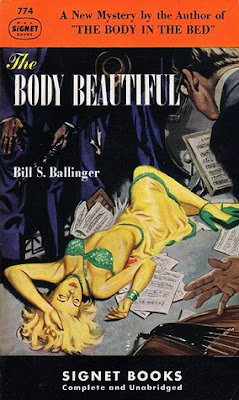 While writing over 150 teleplays, Bill S. Ballinger (1912-1980) still had the opportunity to author nearly 30 novels. His crime-noir and detective fiction is still held in high regard, including two novels he wrote about a Chicago private-detective named Barr Breed. I read the first of these novels, The Body in the Bed (1948), and really enjoyed it. It was only a matter of time until I tracked down the sequel, The Body Beautiful. It was originally published by Signet in 1949 and was reprinted several times through the mid-1960s.

As described in the first novel, Breed is a private-investigator that runs a staffing agency featuring detectives. His agency is employed by stores, banks, railroads, and any business or individual attempting to retrieve or prevent an economic loss. Often, these investigations eventually lead to murder. In The Body Beautiful, trouble lays its bothersome load right on Breed's front steps.

Breed and his friend Benny stop by the Marlowe Theater to view a traveling performance called The Golden Girls. Mostly, it's scantily clad beauties dancing while suspended in bird cages. After the titillating performance, Benny introduces Breed to one of the show's star performers, a knock-out named Coffee Stearns. During the awkward date, and subsequent awkward dates, Breed can't penetrate Coffee's social walls. But, once she realizes he's a detective, she lowers her guard and bra straps. The two kindle a relationship, but it's short-lived. During a performance, Coffee falls from one of the cages and plunges into the crowd. The cause of death? A knife in the back.

Breed is torn up over the murder and wants to investigate free of charge. Like most of these crime-noir detective novels, Breed's police ally is Sergeant Cheenan with the Homicide Division. The two have a bitter relationship due to Breed's reckless abandonment outside of the law. But, Cheenan knows Breed is a relentless gumshoe, so he allows him a long leash. Before Breed starts the investigation, he receives a phone call from a man wanting to hire Breed. The job is worth $1,000 if Breed can confirm that Coffee Stearns was really a woman named Betty Anne Beals. Intrigued by the offer, Breed takes the case.

Ballinger was a tremendous talent and The Body Beautiful is another fine testament to his storytelling skills. I love this Breed character and the two-sided personality he possesses. Sometimes he's Mike Hammer screaming at everyone in the room and at other times he's just a wisecracking predecessor to 1950's Shell Scott. Like the first novel, Breed displays a ferocious fighting spirit, but prefers to rely on others to make mistakes or provide tiny clues that eventually lead to the mystery's resolution.

While mostly saddled in Chicago, the book takes a jaunt to New York briefly. Through a cross-section of suspicious performers, Breed must interview everyone involved in the production and its past performances. I found the characters intriguing and the plot's twist and turns fascinating. The book's grand finale is a suspenseful chase scene through the empty theater as Breed is forced to match wits with the mysterious killer.

If you enjoy these mid 20th century detective novels, then you will love The Body Beautiful. It's clever, suspenseful, funny, and hard-hitting. Unfortunately, this was the second and last appearance of this dynamic detective and that's a real shame. I wish Ballinger could have found a steady and consistent paycheck writing a series of Barr Breed novels. But, we only have these two works as a small glimpse of what might have been.