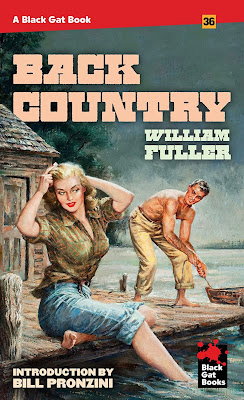 William Fuller worked on freighters and farms, served as a newspaper reporter, and was an infantryman during WWII. It was during the early 1940s through the 1950s that Fuller's short stories were purchased by the likes of Sky Aces, Adventure, and Argosy. Like Steve Fisher, Fuller found success in the slick magazines like Collier's, McCall's and even Esquire. With the onset of paperback publishing, Fuller began writing full-length novels in the 1950s, beginning with 1954's Back Country. It was an enormous success for Dell and Fuller.

The novel, the first of six to star a vagabond hero named Brad Dolan, sold a half-million copies. Long out of print, Stark House Press has resurrected Back Country as part of their Black Gat Book imprint. The reprint features a comprehensive and insightful look at the series by esteemed scholar and author Bill Pronzini. As a fan of Fuller's Brad Dolan character and his only stand-alone novel, The Pace That Kills, I was excited to learn that Back Country was being reintroduced to modern readers.

Brad Dolan served in both WW2 and Korea, an experience that led to harsh imprisonment in a German camp as a prisoner-of-war. Banged up after the wars, Dolan is driving across inland Florida en route to the southern beaches of Miami. Along the way, his car gives out and he becomes stranded in a small, fictional Florida town called Cartersville. It is one of those map dots that features a war monument, a dusty park or two, the obligatory noisy railroad, and old men playing shuffleboard until they die. Dolan reminds readers and himself, “This is the Florida the tourists never see. This is small town anywhere.”

In a sweltering bar, Dolan downs a cold brew and offers to buy a woman a drink. After a minor scuffle, Dolan is hit with a sap. He then finds himself crawling through a Japanese jungle and raking fire across huts. He then wakes up and realizes he's still in the one-horse town, only he now sees it on the wrong side of iron bars. The Cartersville police then beat him up and he spends days in a daze. Eventually, the one horse that owns the town shows up – Mr. Rand Ringo.

Ringo reviews Dolan's past and realizes his operation could benefit from his talents. He pays Dolan a wad of cash, provides lodging, and tells him to just hang around until he needs him. The hanging around part just so happens to involve Ringo's wife in Dolan's new bed. If that isn't enough grief, Dolan befriends Ringo's sexy twenty-something daughter. But, eventually the rubber hits the road and Dolan is asked to bounce on an African-American named Sam Foster. Ringo lets Foster run some illegal gambling in the black section of town, but all the games are rigged. Sam has been tinkering with the scam and trying to earn an honest living. After Dolan talks with Sam, he realizes Ringo is a toxic influence on Cartersville. It's a criminal infestation that has to stop.

Fuller's novel is a product of the times and is filled with a lot of racist comments and attitudes. But, as Pronzini points out in the introduction, Dolan and the author aren't endorsing racism or that attitude.  Dolan's nemesis...Cartersville's nemesis...is the racist law-enforcement controlled and created by Ringo. In the book's furious finale, Dolan and Sam are forced into the street to face a mob of angry white people Hellbent on a hanging. Dolan's wits, determination, and cool factor win the day, but it's a memorable fight.

Back Country's first half is cloudy with a lot of dialogue about God, the purpose of life and social philosophy. These conversations place Dolan on an intellectual plane that ran counter to what my beliefs and expectations were of the book. But, the price of admission is well worth it. The novel's second half is a whirlwind of emotion and violence, saturated in Fuller's scrappy storytelling. It isn't pretty, but it doesn't have to be. Back Country isn't a main street crime-noir. It lives up to its name. Back Country is a crossroads of dastardly villains, despicable authority, and a lot of lyin' and cheatin' no good son of a guns. Thankfully, Brad Dolan is back in the house.