Sin in Their Blood 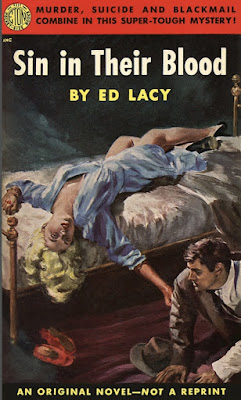 Sin in Their Blood is a 1952 hardboiled crime paperback by under-appreciated author Ed Lacy (real name: Leonard Zinberg, 1911-1968) that remains available today as a reprint.

Our narrator is Matt Ranzino. He’s a musclebound former boxer, cop and tough-guy private detective who set his practice aside to fight in the Korean War. While serving overseas, he suffered a head wound that almost killed him and contracted a case of tuberculosis that landed him in a hospital bed for 11 months. He’s now back in his unnamed hometown looking to rebuild his life with no money or job.

His first stop is to visit his old PI partner, Harry. While Matt was overseas, Harry’s business really took off when Harry discovered the lucrative business of blackmailing businesses into allowing Harry to screen their employees for Commies. Harry offers Matt a job with his new Red-Scare firm, but Matt declines.

Matt’s time in the hospital left him with a scarred lung that could burst open and kill him if he gets involved with any rough stuff, so he really wants to take it easy and live off his military pension. Because that wouldn’t make for much of a mystery novel, Matt finds himself at a crime scene where he is cajoled into investigating the murder of a dead socialite for a lofty fee of $50 per day.

Once Matt has the gig, we have a rather typical private eye mystery - albeit with a rather exhausted and fragile hero at the helm. Ed Lacy was at the top of his writing game in 1952 when he authored Sin in Their Blood. The story moves along at a great clip, and the characters are all vividly drawn and interesting. It’s a conventional mystery tale, but it’s also the story of a shattered war hero regaining his confidence after the trauma of combat.

There’s also a damn fine love story featuring a unique female character among the tough-guy patter and fisticuffs. I’ve enjoyed the romantic elements in other Lacy books, but this one is the tops.

Overall, we have a fairly perfect private-eye yarn that deserves to be remembered. I’m happy to do my part by reviewing it. Now go do yours by reading it.