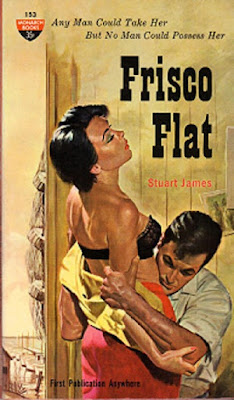 According to Cutting Edge, author Stuart James grew up in rural Pennsylvania and at 15 went to work as a sports reporter for the Delaware Valley Advance. He sold his first story in 1951 to a pulp magazine and later became a staff writer for True and Popular Mechanics. While writing original paperbacks, James became an editor for Midwood Books, a subsidiary of Tower Publications that focused on adult romance novels with lurid covers. It was here that two of James' novels were published, The Devil's Workshop (org. title Bucks County Report (1961) and Judge Not My Sins (1961). Lee Goldberg's Cutting Edge has reprinted four Stuart James' novels including Frisco Flat, originally published in 1960 by Monarch.

After a short career in boxing, Frankie Cargo receives a letter from a friend suggesting that he comes back home. Home is Frisco Flat, a fishing community off the California coast where Frankie grew up. Frankie learns that his father has died and a man named Sam Barlow now controls a majority of the town's industry. Frankie then discovers that his childhood home is now being occupied by a gorgeous squatter named Tosca, the girlfriend of the town's law-enforcement officer. Frankie gets in a fight with the officer and realizes coming home to Frisco Flat was a very poor decision.

Frankie's father left him a great fishing boat, but Barlow wants to buy it. By owning the boat, he will have a complete monopoly on the fishing industry. Frankie has other plans and borrows money to repair the boat and get it to sea. After days of hot, stinky fishing, Frankie's ton of fish should net him a solid profit to build the business back. But, someone working for Barlow shoots up Frankie's boat, thus sinking the vessel and Frankie's livelihood into the ocean depths. However, Barlow's men don't realize that Frankie grabbed something extremely valuable to them, a package worth a million dollars to the highest bidder.

Based on the book's original cover art, I was expecting it to be a romance novel. Instead, it is a gritty, fast-paced crime-noir with lots of traditional genre tropes – criminal empire, the unlikely hero, beautiful women, a heist, and violence. Lots of violence. Frankie's transformation from the town pushover to the defiant hero was such a pleasure to read. I found that James storytelling presented itself like a good screenplay, which makes sense considering he spent a majority of his career in Hollywood on scripts and treatments. There are two hot romances for Frankie, but James doesn't dwell on it. Instead, he pushes the narrative into a crescendo of vengeance that was reminiscent of a western yarn.

However, Frisco Flat isn't terribly original. In fact, it bears a lot of similarity to Edward S. Aarons' 1953 novel The Net. In that story, Barney is a prizefighter that receives a letter from his brother asking him to return to his hometown. The town is a small coastal village where Barney's brother and father own a fishing business. Barney's father has been killed and a town bully named Hurd wants to buy out the family business. When Barney refuses, violence rises to the occasion. Sound familiar?

Obviously, James probably read Aarons' book that was published seven years earlier. But, despite the similarities and borrowed storyline, Frisco Flat was terrific. The romantic angle, character arc, and the surprises were worth the price of admission. If you enjoy great crime-noir literature of the mid 20th century, then you'll absolutely enjoy this book. Cutting Edge made a fine choice by adding Stuart James to their already impressive catalog of classic authors. Frisco Flat proves it in spades.