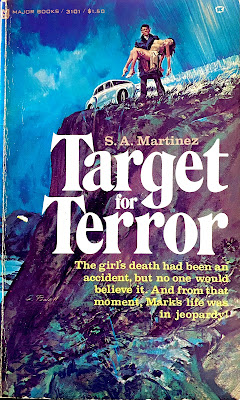 Gerry Powell was a popular pulp and paperback artist that created covers for the likes of Signet, Fawcett Gold Medal, Dell, and Pyramid. It was striking cover art that led me to one of his paperback covers at a local used bookstore. The novel is Target for Terror, authored by S.A. Martinez and published by Major Books in 1976. I could find nothing online that identified the author, so that information remains a mystery. But, the contents of this old paperback are what truly matters. Intrigued by the book's premise, I dove in.

Mark and his wife Claire live in an older, three-level house on the shoreline cliffs of Malibu, California. Mark is a writer, Claire is an actress, and their marriage is falling apart. Through an employment agency, Claire has hired a new house cleaner named Leyla. While she's in New York, she notifies Mark that Leyla should be arriving in the coming days. Mark, despondent over his recent writing failures, droops around the house and spends time talking to his chatty, snooty friend Jamie.

In the opening chapters, young Leyla hitchhikes to Mark's house and arrives on a rainy, stormy night two days ahead of schedule. Readers will immediately realize that something is amiss with Leyla. She is paranoid someone is following her and she's carrying a small canvas bag and a tambourine. To his surprise, Mark finds Leyla on his doorstep in the middle of the night and ushers her inside. Anyone who has read a Gil Brewer novel knows where this is headed.

The book's first 50 pages is Mark's hurried efforts to clean the crime scene – dispose of her clothes, conceal his scratch marks, eliminate her presence from the house. Thinking that her body would wash up on a northern shore, he is shocked to find her body below his house the next morning. The book's narrative then focuses on his efforts to relocate the corpse somewhere else. But, Target of Terror isn't just a tale of murder. Mark finds that he is now the target of whoever was hunting Leyla. They think he killed Leyla to obtain the valuable thing they want. When detectives, Claire, and Jamie become involved, the whole narrative twists and turns into a cat and mouse chase over Leyla's secret treasure.

You have to realize, this novel was published by Major Books. They were a lowly 1970s publisher with terrible editing and equally terrible books. Due to the publisher, Target for Terror reads like a play or a rough draft. The dialogue isn't natural, the pacing is a little off, and the characters are mostly one-dimensional. The main villain is stereotypical and there's very little backstory that suggests Mark is capable of rape and murder. But, despite the abysmal editing job, I can say I enjoyed the book. Martinez's writing is serviceable enough and I had the foresight to realize the finished product would be a hack job. In the hands of a capable editor, the book would have been a real treat. Unfortunately, what's left here is just another average paperback collecting dust bunnies in a basement zoo.