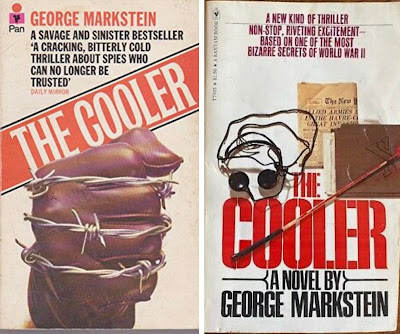 George Markstein (1926-1987) was a Canadian-born British journalist and television writer best known for his work scripting the TV show The Prisoner. He was also an author of espionage thrillers, including his first novel, The Cooler, from 1974.

The Cooler takes place during World War 2 in 1944 England. The British employ an obscure spy agency known as the Inter Services Research Bureau for incursions into Nazi territory - mostly France - for assassinations and sabotage. The novel follows three spies - two Brits and one German. Here are the players:

James Loach is a seasoned spy in London. The day before he is to embark on a dangerous mission behind enemy lines in Nazi-occupied France, he learns that his team, already there, has largely disappeared. The last message that London receives from the team’s radio operator instructs Loach not to join them because of the imminent danger. As such, Loach is sidelined in London awaiting word on the fate of his team, and he gets into some trouble at home. Weird trouble. Kinky trouble. Sending a violent sex maniac like Loach on another mission in France just isn’t an option.

We also meet Claire. She’s a sexy trainee in the secret agent saboteur program learning how to infiltrate, fight and kill Germans with Ninja-like skills. Her training sequences were among the best I’ve read in adventure fiction. The problem is that maybe Claire is just a little too violent and unsuitable for the subtle work of spy tradecraft. Until the agency figures out how to use her, she is also benched. That’s where she meets Loach - in a remote holding facility for wayward spies called The Cooler.

Finally, we meet a German spy named Grau operating in London with false identity papers. His mission in London — I won’t spoil it here — is really, really clever. Any reader of spy fiction will be able to appreciate the ingenuity of the author’s inclusion of this storyline.

Markstein takes his sweet time introducing the principals and putting them in their places before the plot takes shape. That’s the problem. It takes forever for a storyline to develop. For what it’s worth, I was never bored because the characters were all vividly-drawn, seriously-flawed intel officers. But at some point, all these great characters need to actually do something, and that doesn’t happen until the very end.

It turns out there is someone spying for Germany from inside The Cooler, and the book quickly becomes a whodunnit. None of this really worked very well despite some fine writing. The ending felt rushed, and the solution was anticlimactic. I’m not giving up on Markstein as an author, but this debut needed some serious reworking before it was released for public consumption.

Bottom Line: Time is a precious commodity. Don’t bother with this one.