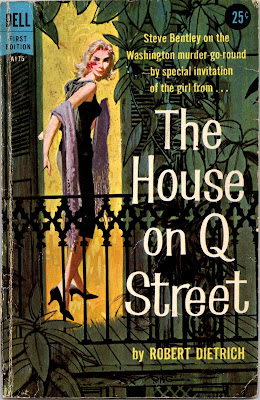 Many fans point to the Steve Bentley series as the best representation of E. Howard Hunt's literary work. Hunt, a former CIA operative and convicted Watergate conspirator, authored over 70 novels using a variety of pseudonyms. The Steve Bentley series was written under the name Robert Dietrich between 1957 through 1962, with one additional novel penned in 1999. I've previously read the first two installments and thoroughly enjoyed them. The books were originally published by Dell and have recently been reprinted by Cutting Edge Books. Savoring the series, it's been 20 months since I've visited the character. Continuing in series order, I'm picking up with the third installment, 1959's The House on Q Street.

Steve Bentley is a Korean War veteran that was once employed by the U.S. Treasury Department to break up black market rings internationally. Now, he is employed as a busy tax accountant surrounded by the I-495 beltway in Washington, D.C. In The House on Q Street, Bentley is referred by a friend to Major General Walter Ferrand Ballou, U.S.M.C. Retired. The desired meeting is for Bentley to possibly replace Ballou's recently deceased accountant. But, when the two meet face to face, it's a rather unusual discussion.

Ballou's family is immensely wealthy based on old Washington money. Ballou is quite the war hero, fighting in WW2's Pacific Theater and earning his fruit salad the hard way. In a cavalier approach, Ballou never cashed his paychecks because he felt it was his duty to serve America. Ballou retired and then served as Chief of State Police before later declining a bid for governor. Bentley, respecting Ballou, asks how he can assist the retired general. Without stating the obvious, Ballou needs Bentley to hide a $100,000 payout to a blackmailer by creating a corporation and providing various write-offs and losses. The secrecy is to protect both his son and daughter from noticing the withdraw from their eventual lucrative trust.

By creating the corporation, Bentley learns that Ballou's daughter Francie is a drop-dead knockout that's divorced and flirty. Her brother Winston is a screw-up that dabbles in horse racing and slowly whittles away his trust funds. Upon a return visit to Ballou's house, Bentley tackles an intruder and then notifies the police. The next day, Bentley learns that a former state police officer that Ballou had previously fired had been shot to death. What's interesting is that the dead man's wife shows up to bail out Ballou's intruder from jail. How are these connected? When Bentley discovers that this same woman was married to a doctor eight years earlier, he finds out that the man was murdered as well. Two husbands. Two murders. The link turns out to be way more than Bentley bargained for.

There is a lot to unpack in The House on Q Street, but it's never too convoluted for its own good. I read the novel in nearly one sitting and absolutely loved the pace and the influx of clues as each chapter scurried by. Hunt sometimes floundered in the “literary hack” echelon of crime-noir and espionage writers. But, with these Steve Bentley thrillers, he absolutely nails it every time. Bentley's probing into the murders leads to a missing gun, a mysterious nurse, the General's secrets, and a high-level criminal in Baltimore. Of course, the hero still has time for the Scotch and Ballou's hot daughter.

The House on Q Street is another D.C. thriller, complete with a twisty mystery and compelling characters. Steve Bentley remains a competent paperback hero that rubs shoulders with politicians while also digging into their darkened past to expose hidden truths. The combination of romance, intrigue, violence, and scandal makes it an absolute pleasure to read.