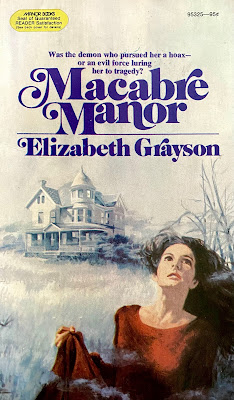 Based on a small sample size, the Gothics that I've read from the late 1960s through the mid-1970s have teased a supernatural element. The covers and taglines always suggest that the big mansion or castle contains a ghost or spirit haunting a beautiful woman. The finale fizzles out to be a scorned lover or disenchanted relative that suddenly becomes greedy and secretive. It was conventional style that is reminiscent of the shudder pulps of the early 20th century. At the beginning of the 1974 Manor book Macabre Manor, authored by Elizabeth Grayson, the protagonist appears to be tormented by a demon. Is the terrifying demon real or just a figment of her twisted imagination? Needing to resolve this important question, I jumped into this 190 page vintage paperback.

Joyce has recently married Philip Hammond and moved into his family's mansion on the Caribbean island of  St Michael. After a walk on the beach, Joyce is visited by a demon calling himself a French man named Jean Pierre. He appears to Joyce as a “zombie” and slowly begins to demand things from her. After Joyce suffers a nervous breakdown, she is hospitalized and treated for anxiety. The Hammond family feels that Joyce isn't really interacting with a demon, instead she's suffering from fatigue and her new surroundings. When the demon asks Joyce to poison her father-in-law, the book begins to delve into a criminal conspiracy involving a bank and illegal gambling.

Macabre Manor is merely an average Gothic novel with the traditional genre tropes – inheritance, wealthy family, supernatural sprinkles, and a vulnerable female embarking on a dark mental journey. According to Goodreads, Elizabeth Kary used the pseudonym Elizabeth Grayson to author a number of historical romance novels. However, based on my research, I can't verify if this author is the same one that wrote two other Gothic novels in the 1970s for Manor Books – By Demon's Possessed (1973) and Token of Evil (1974). Based on the quality of Macabre Manor, I'm in no hurry to find out.