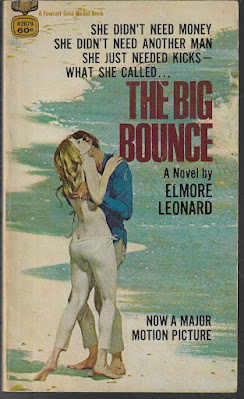 Between 1953 and 1961, Elmore Leonard (1925-2013) authored his first five career novels and all were westerns. Leonard played his first hand of crime-fiction in 1966 with a relatively unknown novel called The Big Bounce. He shopped it to a variety of publishers and they all declined. In 1969, Fawcett Gold Medal published the book simply because it had been adapted to film the same year starring Ryan O'Neal and Leigh Taylor-Young. The movie was a flop, so Hollywood tried again in 2004 with a cast including Owen Wilson, Morgan Freeman, and Charlie Sheen. It was such a disaster that Leonard described it as the “second-worst movie ever made”, alluding to the fact that the first one was the worst. Despite the publication and theatrical horror associated with The Big Bounce, I decided to read it. I wish I had those hours back.

The book begins with three men watching a video tape of migrant worker Jack Ryan (no relation to Tom Clancy) executing a home-run swing with a baseball bat on his crew leader's face. Readers later learn that Ryan was a former Baseball Player and has now spiraled down the labor ladder to the position of Seasonal Picker of Cucumbers in a lakeside region of Michigan. Ryan and acquaintances (he never had friends) rob a lake-house and steal $750 from wallets and purses. Ryan fears that the other guys will get caught simply because the box they placed the wallets and purses could be found.

After being fired from his job for smashing the foreman with the bat, Ryan is hired as a Handyman by a resort owner named Mr. Majestyk (oddly, no relation to the character Leonard created five years later). Ryan spends time in his new position avoiding an average-looking female guest who desperately wants to get lai....wants to have her window fixed. Ryan hooks up with Nancy instead, a young seductress who is banging two men, one of which is the owner of the cucumber farm. Ryan and Nancy run around shooting glass objects while planning to steal the payroll money from the farm.

I have no Earthly idea why anyone in Hollywood wanted to make a film from this novel. Or, why anyone would want to attempt it again. The book is mindless with its lack of plot structure and features one of the most uninteresting protagonists I've read. I nearly gave up reading it twice, but just kept pushing onward out of respect for Elmore Leonard. There isn't anything remotely compelling about the story, the character development, pace, or dialogue. If you must read everything Leonard wrote, then I guess you owe it to yourself to experience the good and the bad. Beyond that, avoid this book!