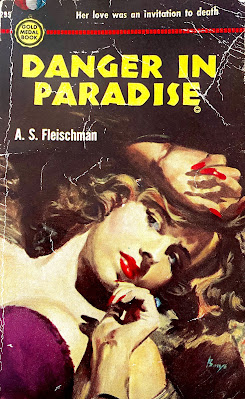 Stark House Press continues to reprint the literary work of A.S. Fleischman. The talented Navy veteran, magician, and author began writing genre paperbacks in 1948, a career that led into his more prominent role as a children's storyteller. Among his westerns, movie novelizations, and crime-fiction, the genre that most feel was Fleischman's strong suit was exotic adventure. Novels like Shanghai Flame, Counterspy Express, Malay Woman, and Blood Alley are set in and around Asian locations. In 2018, Stark House reprinted Fleischman's Malay Woman and Danger in Paradise as a two-in-one with an introduction by David Laurence Wilson. Having read, reviewed, and enjoyed Malay Woman, I was excited to read 1953's Danger in Paradise to experience more of the author's thrilling exotic adventures.

Jefferson Cape is a Montana native that works as an international geologist in the Far East. After a long voyage across the Java Sea with a crazy Australian captain, Cape is happy for a day stop in Buleleng, Indonesia. The temperature is red hot, the beer is hotter, and the mosquitoes are like a thick drapery of disease and despair. But, Cape is on dry land, at a bar, enjoying these tiny moments when a beautiful woman approaches him for an unusual request.

The woman explains that she has a very tiny package that she needs to export out of Buleleng. It's a business card with Russian wording on the back. She explains that this has to do with terrorists in the country and arms trading. She wants him to carry it back to the states and deliver it to the CIA. Unfortunately Cape agrees and his entire world comes crashing down. The woman seemingly disappears and Cape finds himself stranded and on the run from a Chinese gunman, a powerful businessman, and terrorists as his ship sails away. His only ally is a sexy, mysterious woman, but she somehow knows the lady from the bar and is connected to this whole deadly fiasco.

Danger in Paradise wasn't as entertaining as I had hoped. I felt that Fleischman had too many ideas and couldn't really flesh them out in a uniform way. In fact, in the first couple of pages, Cape looks at the woman in the bar and says, “Okay, I'll bite.” I felt like this was Fleischman after writing a couple of the early pages for a plot he hadn't quite constructed yet. He's reminding himself that he has this American man in a bar meeting a mysterious woman. Where can he take this rudimentary idea? Unfortunately, he takes it too far.

At 160 pages, the narrative is saturated in chase sequences that left me bewildered about which characters were after each other. I wanted the story to be explained quickly so I could enjoy the twists and turns, but once it was unveiled, I needed some story elements concealed to keep it interesting. Gunrunning, terrorists, exotic locales and shady ladies should be an easy story to tell. But, Danger in Paradise drowns in the details and becomes a convoluted chore. Of course, Fleischman can write his tail off, but the end result left me exhausted.