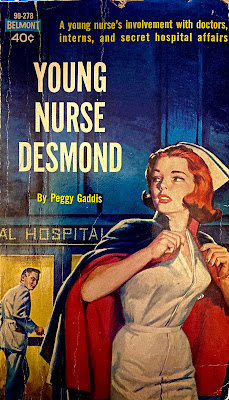 Peggy Gaddis Dern (Erolie Pearl Gaddis, 1895-1966) used pseudonyms like Georgia Craig, Joan Sherman, Perry Lindsay, and Peggy Gaddis to author romance novels and nurse fiction throughout the mid 20th century. Her first published work was erotic and racy novels printed by the lowly publisher Godwin in 1935. In the 1940s, she began to be published by Phoenix Press, Gramercy, and Arcadia. Prior to her death, Belmont and other publishers began reprinting her sexy romance novels to entice nurse-fiction fans. A great example is Young Nurse Desmond, published by Belmont in 1963. This novel was originally titled Innocent Wanton and published by Phoenix Press in 1950 under Dern's pseudonym, Gail Jordan. It was also printed under the title Student Nurse by Uni-Book as Digest Paperback #37.

Innocent Wanton is a sexy, juvenile delinquent style novel about a young girl named Martha that loses her virginity to a celebrity playwright named Jordan. Martha isn't a nurse, but works as a trainee in the Happy Valley Nursing Home. I'm not even sure the book discloses her last name as Desmond. After providing some pills to Jordan (who is there voluntarily), she learns that he is in this facility due to a drinking problem. Jordan immediately falls in love with Martha and desires to have her. After he begs Martha to have dinner with him, he is able to cajole her into the back seat where he takes her innocence on the cold vinyl seat.

Later, Jordan proposes to Martha, she says yes, and the two move to a penthouse apartment in Manhattan. Martha quickly realizes that Jordan is a bit of a scumbag when she discovers that he has a girlfriend on the side. Risking the rewards of a robust alimony check, Martha bails on the marriage and rides a bus to the most overused locale in crime-noir history – the always reliable shore-front cottage in Small Town, Flordia. Her fierce independence doesn't last long when a man named Paul spots her bouncing out of the water. After “learning sex” from Jordan, Martha is determined to give her body to Paul in the most domineering way possible. However, Martha's problem is that Paul has a secret, a hidden connection to Jordan's past life. He is withholding information from her in hopes that she will be an easier lay. How can she escape these horny, secretive men and find true love?

The cover of Belmont's Young Nurse Desmond paperback, which again is the re-titled version of the earlier Innocent Wanton, states the book is about a young nurse's involvement with doctors, interns, and secret hospital affairs. The artwork clearly has the main character dressed as a nurse and leaving a general hospital. Does this sound like the same book? 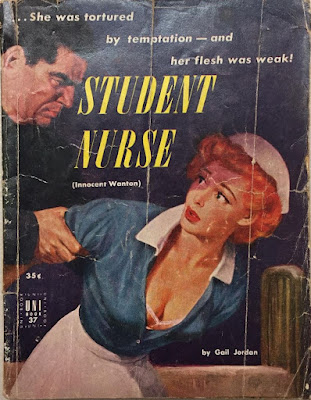 Unfortunately, Belmont and other publisher were notorious at cashing in on the hottest literary trends by reprinting prior novels. Dell probably made a great deal of money reprinting early mystery novels as Gothics in the 1960s and 1970s. In this case, Belmont is cashing in on nurse-fiction, a genre that Peggy Gaddis contributed to for 25+ years. By changing the author from Gail Jordan back to the marketable Peggy Gaddis name, and slapping a nurse on the cover, it probably swayed fans into believing this is a new release for the author.

This is my first experience with Peggy Dern and I mostly enjoyed the book. I have a tolerance for romance novels based on my love of Gothics and we've covered the romance-heavy slave Gothics (also known as plantation novels). The sex isn't graphic, but Martha was described in a voluptuous way that motivated me to learn more about her. Her torrid relationship with Jordan came to a satisfying conclusion and I genuinely enjoyed the rivalry between the lovers. I think if you enjoy juvenile delinquent-styled stories (Martha is 18-yrs of age) then you will probably find enough to like here. Innocent Wanton, aka Young Nurse Desmond, aka Student Nurse, is a lukewarm recommendation.