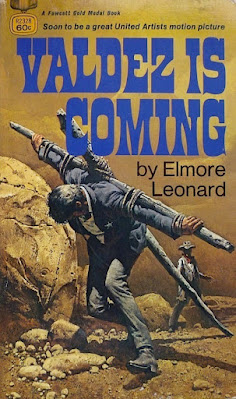 Thus far, I've enjoyed everything Elmore Leonard (1925-2013) has written. From westerns like Escape from Five Shadows (1956) and Last Stand at Saber River (1959) to crime-fiction like Mr. Majestyk (1974). Arguably, one of his best western novels is Valdez is Coming. It was originally published in 1971 and was adapted into a 1974 movie starring Burt Lancaster.

The novel features Bob Valdez as a constable working in Arizona in the late 1800s. After riding shotgun for a stagecoach, Valdez returns to town to discover several armed cattlemen surrounding a small farm. The group is led by a hardheaded, wealthy rancher named Tanner and a gunman named Davis. Tanner claims that he recognized the farmer, an African-American, as a man who murdered a friend of his years ago. Valdez questions the validity of Tanner's accusation and is dismayed by the vigilante justice that was set to occur.

After Valdez questions Tanner, he walks through the circling guns to visit the farmer directly, eye to eye, and learns that the man may be completely innocent of the crime and has paperwork that proves a solid alibi. But, Davis refuses to idly stand by and impatiently fires at the farmer. In the exchange, Valdez fatally shoots the farmer. Once the gun smoke clears, Tanner examines the corpse and admits that he made a mistake and this wasn't the same man.

Mournfully, Valdez wants Tanner to pay the farmer's pregnant widow $500 as compensation for wrongfully killing her husband. He mentions it to the men and they ride away. When Valdez rides into Tanner's camp to ask for the money, he is ridiculed, shot at and ordered to stay away. Refusing to accept no for an answer, Valdez attempts asking again, this time riding to Tanner's ranch to make the request. It’s here that Valdez is violently tied to a wooden cross and cruelly forced to walk miles through the desert. After being rescued, Valdez contemplates his next move; accept defeat and carry on or continue the pursuit despite the odds.

Leonard's novel centers around a character arc as Valdez slowly changes into the buckskin version of his younger self. Throughout the book, Valdez thinks about his prior life - a history of violence – and ponders his complacency in the present as a constable. Tanner's action is like a toggle switch for Valdez's transformation. The violence, emotional turbulence, and romantic angle – surprisingly, it has one – balances the hero's cool demeanor. While never a coward, Valdez still possesses reserved tendencies that ultimately make him weaker in the book's first and second acts.

Leonard's storytelling prowess is awe-inspiring as he makes this rather simple story explode into an emotional and violent battlefield. There is clearly a reader investment – no matter if you are a western fan or not – that leads to a satisfying conclusion despite some negativity that is associated with the book's finale. I like the way Leonard finished the novel and found that the story didn't require a traditional ending. The “cowboy riding off into the sunset” conclusion may have tarnished Leonard's narrative.  Instead, it's simply a conventional western until it isn't. And that is what makes Valdez is Coming a masterpiece of the genre.