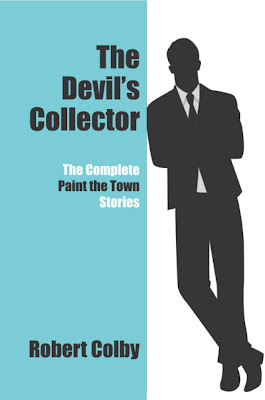 Between 1975 and 1980, Robert Colby (1916-2006) authored six stories starring a mercenary vigilante named Brock — all published in Alfred Hitchcock Mystery Magazine. The stories — along with a previously-unpublished installment — have been compiled into a single volume called The Devil’s Collector.

Each of the stories is titled “Paint the Town…” followed by a color. So, the first story is “Paint the Town Black” and the last one is “Paint the Town Aquamarine.” When we meet Brock in the opening story, he’s dressed as a fancy dandy walking into a roadhouse bar in a seedy part of town. After attracting all sorts of attention from the rough characters inside, Brock leaves the tavern and walks toward the city.

Of course, some hoods accost the soft target on the street, and Brock goes Charles Bronson on the punks taking their money in the process. Later in the story, he dispatches another thief while also swiping the cash and explaining, “There is a tax on evil…and I am the collector.”

Colby was clearly influenced by the men’s adventure vigilante paperback craze of the 1970s, when he crafted the first story. His innovation was making the vigilante a foppish gentleman seeking to line his own pockets with crime money rather than a ‘Nam vet with a vendetta.

In later stories, Brock graduates from street punks and begins targeting con-artists, counterfeiters, and thieves. These stories (including “Green”) are more con-man tales where Brock’s cleverness wins the day, recalling the Saint series by Leslie Charteris. In other stories (“White”), he’s more of a Travis McGee salvage consultant who recovers stolen loot for a victim while extracting his “tax” for himself.

Overall, The Devil’s Collector is an innovative short story collection with a unique lead character given room to evolve over seven stand-alone stories. You may or may not want to mainline all these short works back-to-back. I think the collection would be more satisfying as a palate cleanser between longer pieces. In any case, call it a winner. Recommended.