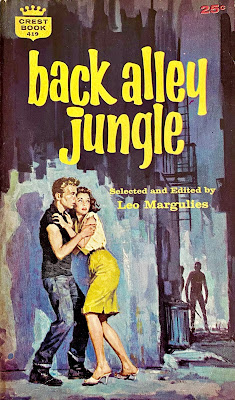 Leo Margulies (1900-1975) is a familiar name in the world of pulps, MAMs and digests. Originally from New York, he started as a researcher for 20th Century Fox before becoming the editor of Ned Pines' Standard Magazines. Along with magazines like Mike Shayne, Popular Detective and Thrilling Detective, Margulies also compiled and edited a number of anthology collections including Back Alley Jungle. This 1960 collection of short stories was initially published by Fawcett Gold Medal under the Crest brand name. Here’s some highlights:

Ed McBain (written under the name of Richard Marsten) is the author of the 1952 story entitled “Carrera’s Woman”. In it, a man named Jeff has been working the oil fields in Mexico. After many hard years, Jeff amassed $10,000 in savings. Before returning to America to start a new life he was robbed by a co-worker named Carrera and his girlfriend Linda. When the story starts, Jeff takes Linda hostage behind big rocks. Carrera is across the dry gulch firing futilely into the rocks hoping to kill Jeff and reclaim Linda. During the night, the three parties are at each other's throats with both sides taking potshots across the gap. But the story changes fast as Linda starts to seduce Jeff. Is this an escape strategy or is she sincere in her sexual advances? This is the ultimate question McBain is asking, and it's such a tempting one. I really liked this story and it's a key part of the collection.

In Steve Frazee's 1953 "Graveyard Shift" story, the close narration focuses on a busy police dispatcher on a late night shift. When a woman holding a gun enters the police station, this lone dispatcher is ordered to place all of the city's patrol cars in one section of the city. The woman's motive becomes clear when the dispatcher locates the pattern - she's purposefully maneuvering the police away from the local casino. Involved in this complex case, it is up to the dispatcher to use code words so that officers redirect efforts to the casino. This is a really unique story that presents a rare, but deserving hero - the police dispatcher.

The longest and most enjoyable story is Richard Deming's 1955 short "The War". This starts with a woman named Janice entering the Rotunda Club, a posh casino owned by Clancy Ross. After a talk and a call upstairs, Clancy greets Janice in his office. In short, Janice is the widow of Clancy's old Army buddy from the Korean War. She explains to Clancy that her husband witnessed a mob slaying and was later gunned down by killers working for a syndicate kingpin named Lawson. During the exchange, the Mob framed Janice so that she would appear as a frustrated wife who shot her husband during a heated argument. After the arrest, the Mob posted bail for her in an effort to then kill her in a way that would resemble suicide. With no friends or allies, Janice fled to Clancy hoping he will keep her safe. This violent and explosive story features Clancy at odds with Lawson over the woman's safety. But is there some secret about her? Deming was a great storyteller and “The War” is absolutely awesome. I can't say enough good things about it.

At 150-pages and 10 solid short-stories, Back Alley Jungle is an absolute joy to read and a fairly affordable used paperback considering the era and publisher. Highly recommended.