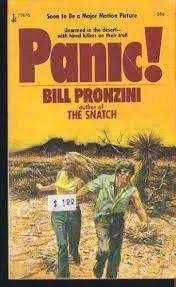 California native Bill Pronzini (b. 1943) is mostly known for his Nameless Detective, a series of private-eye novels that began in 1971 and has lasted nearly 50 installments. Pronzini has also authored over three-hundred short-stories and compiled dozens upon dozens of story compilations. The author also has a number of stand-alone crime-fiction novels on his resume including Panic!. The book was originally published in 1972 and has since been reprinted numerous times through various publishers.

In Panic!, five characters are placed in extreme situations where they are forced to behave in different ways to survive. In essence, it's a gritty, fast-moving crime-noir that checks off mostly everything one needs for the genre: beautiful woman, drifter on the run, a veteran cop and two deadly criminals. Pronzini's prose is fast-paced with most of the attention on the present, although the narrative thankfully explains a few important elements from each character's past that helps to connect the readers to these four men and one woman.

This short book is divided into four days and first introduces readers to a drifter named Lennox. Using a variety of names, Lennox is on the run from a failed marriage. During the divorce, Lennox is ordered to provide nearly his entire life's savings and assets to his ex-wife including a sizable amount of monthly alimony. Refusing to pay, Lennox leaves town and is now penniless and stranded in a dusty desert town called Cuenca Seco. Earning three hots and a cot, Lennox begins working for the town's cafe owner for a few days. While Lennox is working in the cafe's basement, two hitmen arrive to empty their guns into the cafe's owner. Lennox, being the only other party in the cafe, sees and hears the event and immediately runs into the desert to avoid the two killers.

In separate parts of the narrative, the two hitmen are introduced – one a seasoned, veteran killer and the other a wet-behind-the-ears apprentice learning his new profession. Also, there's a woman named Jana, an accomplished artist and author who, like Lennox, is also on the run. Although her situation isn't illegal, she's running from an affair in New York that has placed her career on the rails. She's arriving in Cuenca Seco to spend a quiet week writing the book that will meet deadlines and urgent requests. Unfortunately, she journeys into the desert to study rock formations on the day of the killing. After a dehydrated, panicked Lennox runs to her in the desert, she's unwillingly caught up in the deadly chase – two people with no food and water on the run through a dry wasteland as killers track them down.

Then there's Brackeen. He's the real star, although his role is a bit underplayed due to the nature of the character. In a rather mesmerizing backstory, the author shows Brackeen as a veteran police officer in San Francisco. On a really horrific day on patrol, Brackeen's career as a police officer comes to a screeching hiatus. After years of alcohol and depression, Brackeen attempts multiple careers in multiple places before finally putting down stakes in Cuenca Seco. Due to the lack of crime (and people for that matter), the town makes Brackeen a deputy. The former big city cop spends most of his day patrolling the desert and getting slouched. However, once the cafe owner's body is found, Brackeen is propelled into the story as a lovable loser. The state authorities refuse to accept his plausible – and very accurate – proposal of why and how the cafe owner was murdered. His validity as a creditable asset to the community is questioned due to his alcohol abuse and downtrodden lifestyle.

There's so many things to love and enjoy about Pronzini's simplistic storytelling. The quest for freedom, overcoming adversity, retribution, the replacement of heroes and the mere idea that the average citizen's best approach to fixing a problem is self-realization. Pronzini's desert locale is symbolic – it's two characters running through life without the emotional resources to contend with complexity.

Pronzini is always solid and Panic! is just another testament to his strengths as an author. Despite one scene presented as outrageously preposterous in 2021 (blatantly obvious to today's reader), the novel has aged well. Whether you love hard-charging crime-fiction or gritty character studies, this brisk novel is just fantastic.