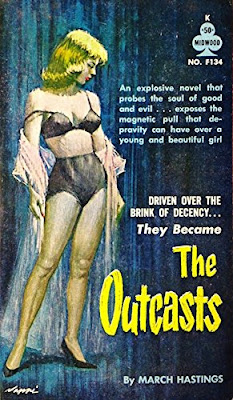 Author Sally Singer (b. 1930) utilized a number of pseudonyms to author lesbian pulp fiction in the mid-20th Century. The most popular of these pseudonyms was March Hastings, a name she used to author 11 novels from 1958 through 1969. My first experience with the author is her 1961 novel The Outcasts, written as March Hasting and originally published by Midwood. The novel has now been reprinted for modern audiences by Cutting Edge Books.

Jennie is a twenty-something New York woman married to an aspiring artist named Brian. They have had a rocky marriage stemming from a failed pregnancy but remain together to avoid an embarrassing divorce. Brian's sexual urges have led him to months of infidelity while Jennie struggles to control her personal desires and sexual frustrations with Brian. As the novel begins, Brian rapes Jennie before instructing her to accompany him to an art show where his work is being shown.

It's at the art show where Jennie is introduced to Brian's business advocate, a luscious, sexually-charged woman named Leigh. In forced conversation, Jennie learns from Leigh that she has had sex with Brian, thus the personal interest in his below-average painting talents. Leigh and her husband are extremely wealthy and they invite both Brian and Jennie to the couple's swanky seaside mansion for the weekend. Jennie, caving to her desire to learn more about Leigh, accepts the proposal despite her white-hot anger with Brian.

As the wet and wild weekend getaway unfolds, Jennie spirals further into her sexually repressed feelings. The first night at the mansion, Jennie witnesses Leigh and Brian engaged in sexual foreplay, a not-so-shocking discovery that leads Jennie to pleasure herself while watching Brian from a window. Jennie's instinct is that Leigh is toying with Brian, perhaps using him as some sort of bizarre and ritualistic way to attract Jennie. Needless to say, The Outcasts takes a turn into full-on lesbian affairs as Leigh and Jennie realize they are both sexually starving from frustrated heterosexual relationships.

The Outcasts, as a 1961 seedy paperback, isn't remotely graphic by today's standards, but Singer writes in a provocative way that is visually stimulating and somehow still timeless. Regardless of whether you like lesbian pulp-fiction (newsflash: this is my first foray into it), The Outcasts has this riveting subplot that involves Leigh's freakish husband. As the novel ascended from kinky foreplay into heightened arousal, Singer successfully incorporates an element that is mostly found in Gothic Romance – the beautiful young woman trapped in the mansion of doom. Leigh's odd basement combined with her equally odd husband added a sense of panic and fear to what would otherwise be a tame lesbian romance. I believe this additional element upsold me from liking to loving this book. Based on sheer reading pleasure, I'll be reading more of Sally Singer's literary work.