The King of Horror & Other Stories 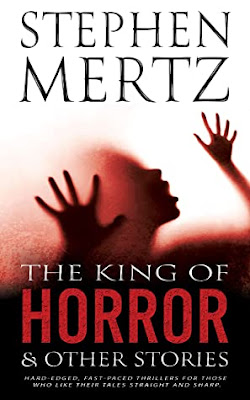 Paperback Warrior has a thing for Stephen Mertz. That admiration comes partly from the fact that the M.I.A. Hunter novels were my first introduction to the men's action-adventure genre. Since we started this blog, we have mostly focused our reviews of Mertz's work on military and vigilante fiction like Mack Bolan, Tunnel Rats and the M.I.A. Hunter novels. Thanks to Wolfpack Publishing, a collection of Mertz's short fiction stories has been compiled under the title The King of Horror & Other Stories. This multi-faceted examination of Mertz's fast-paced style offers a blend of genre offerings that display the author's diversity.

While I enjoyed the entire collection, here are some highlights:

“Last Stand” features Blaze and Kate, a unique pair of mercenaries who are married to each other. This gritty duo travels the world, accepting contracts to guard stagecoaches, participate in various revolutions or just killing selected targets. After a long career of blood and bullets, Blaze and Kate eventually saved up enough to retire to Mexico. When the story begins, they are both attempting to cross the border, but are ambushed by Native Americans. Through 11 action-oriented pages, the two of them attempt to shoot their way out only to be plagued by wave after wave of warriors. It's really a last stand for Blaze and Kate as Mertz places these characters in an extreme position to test their love for each other. This is an effective story that shows the powerful force of love through overwhelming adversity.

Like “Last Stand”, the Vietnam War story “Fragged” again showcases Mertz's interesting outlook on marriage and the ties that bind. “Fragged” features Cord McCall, an investigator working for the U.S. Criminal Investigation Division in Saigon. McCall investigates homicide, desertion, robbery and other crimes committed within military ranks. Interestingly, McCall's wife is also in Vietnam as a war reporter. The two find themselves in Firebase Tiger, a military installation where McCall is responsible for a homicide investigation. A lieutenant-colonel in the 13th Infantry Battalion was killed by a hand grenade in his own barracks. It is up to McCall to determine if this is an enemy penetration or if someone within the battalion committed the murder. It is a great return to the golden age of the mysteries of the locked chamber – which, why, where, how. Also, there is Mertz's signature of sandbags, guts and bloody warfare. These two characters also appear in another included story called “Chez Erotique” as well as Mertz's novel Saigon Homicide.

Mertz says that “Talon's Gift” is the nastiest story he has ever written. It's not so much nasty as it is violently shocking. The narrative features a suburban couple named Talon and Evie. When Evie departs to the movie theater, Talon begins to spin the cylinder of his .38 while explaining to readers (and himself) that Evie has been unfaithful. There's some backstory on the neighborhood and the couple's neighbor Pete. The most intriguing part for me was Talon's profession. I won't spoil the fun for you. It's an enjoyable read.

The book's centerpiece is “The King of Horror”, a short-story that Mertz penned about his friend and longtime author Michael Avallone (1924-1999). In many ways the main character, established horror author Rigley Balbo, is Avallone. Mertz's line, “A man who was cheated and pushed aside by these grubby, Johnny-come-lately punks and their million-dollar contracts and their New York Times bestsellers”, perfectly describes the peaks and valleys of Avallone's career. In first person narration, Balbo explains that he was an A-lister early in his career before the publishing market dried up. Crummy distribution, poor advances and strangled sales have plagued Balbo's career for a decade. Needless to say, Balbo's household name tarnished along with the relationship with his publishing agent. Like one of those old Alfred Hitchcock stories, Balbo has a plan to get even with his agent, a grand scheme that will vengefully heal his heart and mind. However, Mertz pitches a wicked curveball to delightfully wreck Balbo's plan. I loved this story and it's one of those rare “industry insider” stories that jerks the curtain on the hectic and turbulent publishing world.

There are so many great stories in this collection, from Mertz's tribute to the pulps with “The Lizard Men of Blood River” to the slick and violent “The Death Blues”. The compilation showcases all of Mertz's skill and passion - violent storytelling with a powerful sense of love, loss and regret. It was a real treat to find Mertz submerged in many different genres and styles. King of Horror & Other Stories is a real showpiece of skill and craftsmanship. If you've never stepped out of Mertz's Mack Bolan world, this is your certified encouragement to delve into this author's deep literary catalog. It's a dive worth taking.