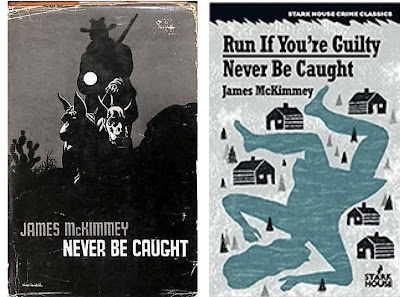 “Never Be Caught” is a 50-page noir novella by James McKimmey originally printed as a U.K. hardcover in 1966 along with two other stories. It has been reprinted by Stark House in a collection of McKimmey’s hard-to-find short works now available in trade paperback and ebook formats.

The story begins in San Lupe, California about 80 miles north of Los Angeles - where Billy Marsh (age 22) has fallen in love with Maria Nivero (age 16). When the time comes for Billy to meet Maria’s mom, Mrs. Nivero is not thrilled about the relationship. Billy is a nice young man if a bit aimless - he’s a counter man at the local trucker’s café. Despite her reservations, Mrs. Nivero gives her reluctant blessing and sends Billy on his way.

After Billy leaves mom’s house, she calls in a favor from a cop friend: do some homework on Billy and find out what his real story is. It takes no time at all for the cop to learn that Billy is a fugitive from San Francisco wanted for an armed robbery turned murder. The cops fail to get the jump on Billy in an exciting scene, and we have a couple on the run story as the young lovers flee from the police together.

McKimmey does such a great job with economical storytelling while shifting the third-person perspective between the hunters, the hunted and the helpers. It’s an exciting cat-and-mouse game building to a climactic suspenseful ending that won’t disappoint any lover of action-packed noir fiction.

I’m so glad I took the time to read “Never Be Caught.” The novella cemented my belief that McKimmey was yet another master of the genre unfairly forgotten by the modern era. I’m extra thankful for the publisher who found this obscure story and made the effort to reprint it. Without question, it would have been lost forever if it weren’t for this Stark House revival. Highly recommended.