Machine (aka Do It to Me) 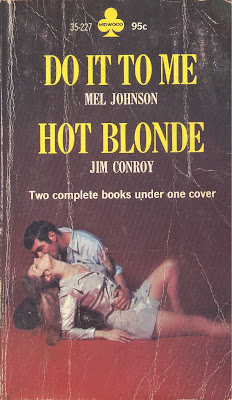 Malzberg introduces Machine in a conversational fashion. Similar to Stephen King's Colorado Kid, the narrative is basically a guy named Mike Jennings sitting with you, the reader, over drinks. You're in the smoky bar buying drinks for Jennings as he explains his turbulent life over a three-day period in Syracuse, N.Y. While there are signs that Jennings has a criminal history, he advises that none of this is essential to his story. Just the 3 days.

Jennings borrows ten-thousand dollars and takes over the rights to a pinball arcade. Jennings rents the building and these machines, some of which are the smoothest and most difficult games east of Chicago. With a location near the University of Syracuse (Malzberg's alma-mater), the likelihood of students slipping nickels into the machines at a steady pace is fairly high. However, it is 1969 and arcade machines are still considered the work of the devil.

Prior to the mid-1970s, most cities had strict ordinances that denounced pinball machines as illegal gambling devices that corrupted the youth of America. Often illegal machines were seized by law-enforcement and destroyed. To protect himself from any grief, Jennings buys a low-level protection ring that provides some protection from the city. When two cops come in and threaten Jennings with the crackdown, he makes an appeal to his protection plan. They warn him that he is safe, but Jennings begins to suspect that his arcade empire is on the brink of collapse.

Machine is laced with sex as Jennings is pleasured by a college co-ed named Sandra. As expected, there are graphic scenes that generally consume three to four pages. Jennings is struggling with his relationship with Sandra - she desires commitment. Hindering relations is the appearance of Jennings’ ex-wife Barbara, which obviously translates into more sex pages. Malzberg has a unique ability to compare passionate sex with pinball players fascinated by the sweet rhythm of the machine. While I skipped out on most of the sex, I enjoyed the comparison.

By and large, Barry Malzberg's presentation is cumbersome. His signature is extremely long paragraphs with very little line breaks throughout. Stark House, and the author himself, agree that the machine is not the best portrayal of Malzberg's work. Many point to his sci-fi novels as real highlights while others suggest his action-adventure men's series Lone Wolf is the best. Machine wasn't particularly brilliant, but I enjoyed the elements of crime fiction enough for it to be worth it. You owe it to yourself to try out a novel by Malzberg. He's a truly unique voice.