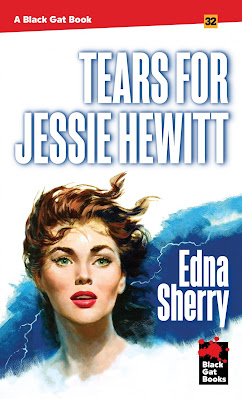 Edna Solomon Sherry (1885-1967) began writing short stories and serials for the pulp magazines in the early 1920s. She collaborated with both Charles K. Harris and Milton Gropper before authoring her debut novel, Sudden Fear, in 1948. The book was adapted into the eponymous 1952 film starring Joan Crawford and Jack Palance. My first introduction to Sherry's work is Tears for Jessie Hewitt from 1958. It was originally published by Dodd Mead under their Red Badge Detective brand and then later reprinted by Dell as She Asked for Murder (with an attractive cover by Robert McGinnis). Thankfully, Stark House Press has reprinted the novel under its original title as a Black Gat Book.

In this crime-noir novel, Sherry plunges readers into the criminal mindset of Francis Edwards. He is a career criminal that focuses on robbing horse racing gamblers after they strike it rich on large payouts. His motif is to case the tracks locating the big winners. Once he chooses his target, he carefully follows the winner back to their home and steals thousands of dollars from them.

In the opening chapters, Edwards accidentally kills his target during an attempted theft. Fleeing California, Edwards begins to call himself Victor Clyde when he meets a distressed young woman named Jessie Hewitt in a cafe. He learns that Jessie was a budding actress who did not find employment. After working as a typist for a plumbing company, Jessie finds herself at a crossroads. She receives an invitation from her father's lawyer to return to her small New York town of Crawfey. Her father is dying and this will be the last chance to reconcile their bad relationship. After Victor learns that Crawfey is a very rural town that rejects any modern progress or intrusions, he conveniently volunteers to take Jessie there.

Like a Charles Runyon character, Victor's treatment by Sherry is an evolution from a smooth operator to a paranoid psychopath. It is this transformation that makes the story extremely entertaining. It's a perfect personality storm – the criminal influence on the young, innocent and righteous Jessie. Sherry cleverly asks the reader to judge the morality of Jessie's actions when faced with Victor's true nature. Tears for Jessie Hewitt is an outstanding character study. But, fans of mid-20th century crime-fiction should find a great deal to love.

As criminal behavior intensifies in a frenetic chain of events, the narrative shifts perspective to a New York City police lieutenant named Lance. I really enjoyed this change of direction when Sherry switched to a police procedural that was reminiscent of an Ed McBain 87th Precinct novel. The author also introduces two surprises that really solidified the story. While I felt the book's finale was underwhelming, I was still impressed by Sherry's storytelling skills. If you love suspenseful crime-noir then you'll love Tears for Jessie Hewitt. I'm already searching online retailers for more of this author's work.