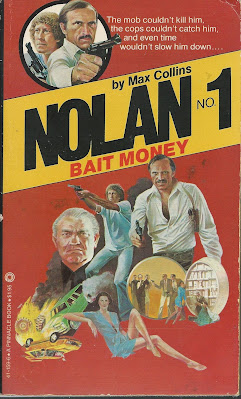 The Nolan series by Max Allan Collins lasted for nine installments stretching between 1973 and 2021 with some sizable gaps in there. The books are a pastiche of the Parker series by Donald E. Westlake/Richard Stark written with Westlake’s blessing. Hard Case Crime has reprinted the first two installments in one volume called Two for the Money, but I’m starting with the opener, Bait Money from 1973.

As we meet Nolan, he’s a 48 year-old professional heist man recovering from a bullet wound with a dame while feeling sorry for himself. Sixteen years ago, Nolan made enemies with a mid-level Chicago mobster named Charlie, and he’s been dodging and catching bullets from the guy ever since. Through an intermediary, Nolan attempts to broker a truce with Charlie so he can retire from the heist business in peace and run a nightclub without looking over his shoulder.

Finding peace with Charlie comes with a price of $100,000, and the only way to get that kind of cash is to pull one more job. Nolan teams up with three amateurs (always a mistake in heist fiction) to knock over a bank in Davenport, Iowa. Collins populates the paperback with an outstanding supporting cast of underworld characters and bumbling wannabes. The heist planning section is particularly rewarding, and the robbery and aftermath both contain many Grade-A action set pieces.

Overall, Nolan is a more vulnerable character than Stark/Westlake’s stoic Parker, but the differences really worked well. The story structure was similar, and I can’t imagine anyone liking one series and not liking the other. I’m told that Bait Money flows nicely into the second book, Blood Money, so I’m excited to dive back in for more Nolan action.

Addendum: The Nolan Novels in Order

Buy a copy of the first two Nolan novels HERE