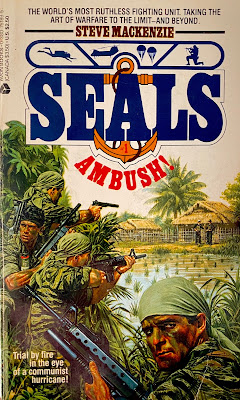 Born in Cheyenne, Wyoming, Kevin Randle earned degrees in journalism, psychology, and military studies. During the Vietnam War, Randle was an Army pilot for two Assault Helicopter Companies. Later, he served in the Air Force and the National Guard and was deployed to active duty in Iraq between 2003-2004. His military experience provides a lot of credibility and realism to his writing. Using the pen name of Eric Helm, Randle is the author of the four-book series Scorpion Squad and the longstanding series Vietnam: Ground Zero. My first experience with his military fiction is his Seals series written under the pseudonym Steve Mackenzie. These novels were published by Avon between 1987 and 1989. I decided to begin with the first, Ambush!

In this installment, the book's premise is based on actual events that took place in the Binh Duong Province northwest of Saigon. Known as Hobo Woods, this dense area of forest served as a concealed location for the Viet Cong to prepare and initiate assaults on the U.S. Army's Fire-Support Base Crockett. This massive firefight consumed most of July 1970 and was one of the last major confrontations of the Vietnam War. Randle himself had experience in this specific location and also used Hobo Woods as the setting in his seventh book in the Vietnam: Ground Zero series.

In the Seals installments, Randle uses Navy Lieutenant Mark Tynan as the consistent hero. In the opening pages of Ambush!, Tynan and his team are positioned overnight near a river. While it is mostly a training exercise prepared by Tynan, the Seals ambush and kill a small patrol of Viet Cong. On one of the enemy soldiers, Tynan finds a bundle of documents saying that the VC were planning a major assault on the Crockett fire support base.

Upon the team's return to base, Tynan gives the documents to his commander, hoping that the intelligence will help Crockett prepare for the attack. Instead, the Navy doesn't want to give the data to the Army because it doesn't want to look bad if the attack never takes place. Instead, documents are ignored and Crockett's caution is never given.

Through most of the story, Tynan's team searches the Hobo woods for more VC and ends up helping Crockett. In an action-packed crescendo, the team splinters into distinct areas of battle – one inside Crockett and the other on the outskirts in the enemy ranks. Randle's attention to detail is superb and allows readers to see these vivid battle stories that seem to emerge from the pages.

While some of Tynan's team comes back in the second instalment, Blackbird, the action for the remaining books is not always fixed in Vietnam. Tynan's orders lead him not just in Southeast Asia, but also to the Middle East and even the United States to counter international terrorism. I'm really curious to see how Randle develops Tynan over the course of the series, including any of the character's personal backstory. In the meantime, I highly encourage Ambush! if you're fond of reading military fiction.