The Kid I Killed Last Night 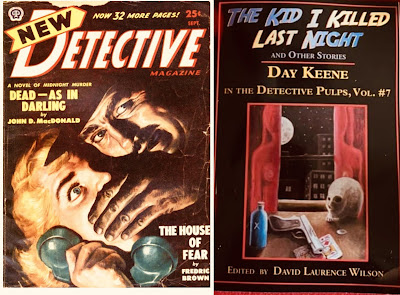 Before he was a successful paperback crime novelist, Day Keene (real name: Gunnard Hjertstedt) was a successful author of short stories in the pulps. Reprint publisher Ramble House has released their seventh volume of Day Keene short stories called The Kid I Killed Last Night named after the story from the September 1949 issue of New Detective Magazine. The 20-page story, reviewed below, originally appeared under the pseudonym Donald King.

Steve Breen is a cop who awakens after narrowly escaping death the night before in a shootout with a street punk. The punk got the worst of it, and is now in the morgue thanks to Breen’s pistol proficiency and more than a little luck. The punk had been stealing a car while high on reefer (it makes people nuts, you know) and opened fire on Breen, a mistake the kid won’t make twice.

Breen is hardboiled as hell, but the killing of the punk has him thinking about everything that’s wrong and corrupt about his city. Due to staff shortages at the department, its incumbent upon Breen to investigate the background of the kid he killed the night before. His personal mission is to find the guy who supplied the kid with dope as well as the local monster who buys the hot cars from the city’s delinquents.

Breen’s investigative technique usually involves knocking the teeth out of the mouth of the wise guy he’s questioning. His brutality is reminiscent of the 1970s serial vigilante paperback heroes such as Mack Bolan. Instead of going after the juvenile delinquents in his town, Breen targets the corruption and culture that turns idle teens into violent criminals.

Overall: a compelling story that was plenty fun to read. It made me want to check out more Day Keene pulp content. Thanks to Ramble House, there’s no shortage of his stories collected for modern readers to enjoy. Recommended.