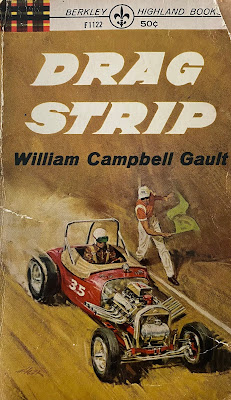 In the 1930s, California essentially became the birthplace of the hot rod. Americans desiring the need to speed looked to the Golden State and its quality homemade cars and the crafty mechanics behind them. By the post-war 1940s, more and more hot rods were found on drag strips or illegal street races. In 1951, the National Hot Rod Association was formed (NHRA) as a brotherhood for grease-monkeys and rebels. So, it's no surprise to find mid-20th Century fiction enamored with fast cars and racing. It was a whole genre unto itself highlighted by Henry Gregor Felson's 1950 novel Hot Rod, a book that bestselling author Stephen King stated was a big influence on his writing.

One of the authors that thrived in hot rod fiction was William Campbell Gault. Besides writing his Brock Callahan series of private-eye novels, Gault authored a number of racing novels like Speedway Challenge (1956), Dirt Track Summer (1961), and The Checkered Flag (1964). I found a used copy of his 1959 race-noir, Drag Strip, and decided to give it a try.

Drag Strip is set in a fictional California town called San Valdestro. The town functions as a hotbed for horse shows, a pedigree of showmanship for the neighboring Los Angeles County residents. It's here that Terry is raised in an upper-class household. His father is a successful attorney and real estate investor and his sister collects equestrian trophies and ribbons. Early in the novel, Terry's father presents him a Woestman-Ebbert, a $10,000 car that would cost about $90K today based on inflation. Needless to say Terry is the talk of the town. But when he ends up illegally racing two brothers, Juan and Pete, he finds himself obsessed with backyard mechanics and customizing junk cars.

There's two main plot points absorbing most of Gault's narrative. The first is Terry, Juan, and Pete creates an automobile club and inviting various members to join based on skill and interest. In a way it is a fish out of water story as Terry finds that a heavy, greasy wrench is far more rewarding than his shiny silver spoon. Terry's descent from spoiled, suburban rich kid to garage mechanic in a rough side of town is a development that was really enjoyable to read. The second story arc features Terry's automobile club wanting to purchase an abandoned airstrip in town. The idea is to formally run a drag strip there and hopefully pick up an endorsement from the NHRA. The two obstacles are a business investor and a group of aviator hobbyists.

If you enjoy fast cars, or this particular era of motor-sports history, Drag Strip will surely please. As a car novice, I was satisfied with the young adult approach by Gault to tell a moving story about hard work and overcoming adversity. The pairing of the wealthy and the poor was a wonderful blend that is just as effective today as it was 60-years ago. For those reasons, Drag Strip is an easy recommendation.