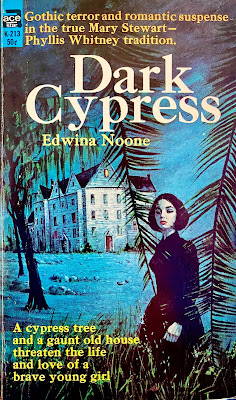 Michael Avallone (1924-1999) was a prolific author that contributed work to many different publishers and genres. Along with authoring television and movie tie-ins for franchises like Man from U.N.C.L.E., Planet of the Apes, and Friday the 13th, Avallone penned a number of stand-alone crime-noir and mystery novels. Avallone also authored over 38 private-eye novels starring his character Ed Noon. In the late 20th Century, Avallone took to writing Gothics using pseudonyms like Jeanne-Anne De Pre, Dorothea Nile, and Priscilla Dalton. Perhaps his best Gothics were penned using the name Edwina Noone, a clever nod to his own private-eye character. My first experience with Avallone's Edwina Noone novels is Dark Cypress, originally published in 1965 by Ace.

The novel stars Stella Owens, a young woman who has arrived at the gloomy, yet magnificent, manor known as Hawk House. Stella has accepted a job as a live-in tutor for Todd Hawk, the only child of a wealthy widow named Arthur Carlton Hawk. Upon her arrival at the mansion, Stella is introduced to Gates, the family's friendly butler, and Dahlia, the family's snobbish housekeeper before being introduced to her young charge.

Stella is immediately consumed with a foreboding atmosphere that surrounds the house and its inhabitants. Dahlia's mysterious behavior serves as an odd voice of authority. Prophetically, she warns Stella that a bedroom upstairs must remain locked and off-limits from any curious exploring. Dahlia's motherly treatment of Todd is both preachy and scolding, a characteristic that lies in stark contrast to Stella's warmer approach. In repeated tutorial sessions, Todd confides in Stella that he is fearful of being taken away soon. He also provides a disturbing account of his older brother Oliver dying in the family's large pool. It's this event that lies at the heart of Avallone's mystery. How did Oliver come to drown in the pool, what's in the locked room and why does Todd suggest that there's an evil presence roaming the dark halls and corridors of Hawk House?

Like any good Gothic, location is key. Avallone's choice to place the characters and events in rural Connecticut during a late New England winter is important. As the tension mounts, the sense of isolation keeps the characters confined to this monstrous structure. Through the narrative, the family's secretive backstory slowly unfolds to explain Stella's precarious dilemma. The storyline is laced with mysterious horror that's nicely balanced with a small offering of romantic development. As a Gothic stereotype, Stella is the vulnerable beauty that becomes trapped in the bad place. Is it the structure or the people that make it a dangerous meeting?

Avallone is just a great author and his use of description makes this chilling novel such a pleasure to read. From cavernous dark forests to narrow, entrapping hallways, Avallone's prose is filled with vivid imagery that proves to be a ghostly character unto itself. If you have a supernatural addiction, Dark Cypress offers just enough sinister happenings to make it a furious page-turner. Unfortunately, the book remains out of print and used paperback copies have become pricey. However, I strongly urge you to spend your hard-earned dollars on acquiring a copy.