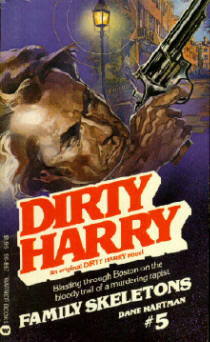 Warner Books released the 12 episodes of the action-adventure series for men Dirty Harry between 1981 and 1983. These novels can be read in any sequence and are based on the character of the three movies Dirty Harry, Magnum Force and The Enforcer. The works are written under the house name of Dane Hartman by the authors Leslie Alan Horvitz and Ric Meyers. Mostly the series is panned by readers, but I still feel compelled to read an installment every few years. Maybe I'm attracted by the artwork.

In Family Skeletons, the fifth novel in the Dirty Harry series, San Francisco detective Harry Callahan decides to take a holiday in Boston. While this trip allows Harry to escape the fight against the West Coast villains, it will not come without an aura of mystery. Linda, Harry's cousin, asked him to travel to Boston to investigate a religious cult called The Unitarian Church. This cult recruited Linda's daughter, Shanna.

Through the book's violent narrative, a Boston serial killer plagues the college campus of the church, eventually killing a number of students that have ties to Shanna and other Unitarian members. Harry befriends a Boston homicide detective assigned to the case and they work together to find the killer. As Harry's suspect list narrows, he finds quarrels with the Callahan family – Linda's husband disagrees with Harry's involvement and wants him out of the city. Is he the killer or just a violent stumbling block?

There is actually a lot to like about family skeletons in comparison to previous installments that left me feeling dissatisfied. Whether this is Horvitz or Meyers, the writing is an upgrade from the standard drivel associated with the series. There is an abundance of action and violence while Harry fights a number of villains through the most violent areas of Boston. Before the twisted ending of the book, there is a shootout and a chase that puts Harry's. 44 against a few shotguns in a grocery store. Suspending unbelief, I soaked everything up and had a great time.

Family Skeletons isn't a literary masterpiece. It's not even as good as a low-shelf, later Mack Bolan installment. But it is entertaining and jammed with action and mystery. I was surprised by the quality and gained a new respect for this series. I'm destined to read more.