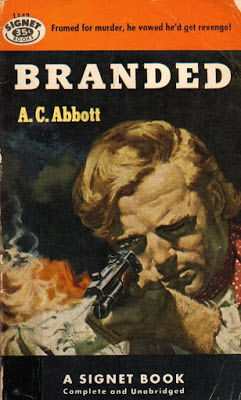 Author Helen Abbott Meinzer (1918-1963) wrote a number of short-stories in the 1940s and 1950s in western pulps like Western Action, Rangeland Romances, 44 Western and Thrilling Western. She wrote these stories using the pseudonym of A.C. Abbott. Along with the short-stories, Meinzer also utilized the name to author two stand-alone novels – Wild Blood (1951) and Branded (1954). Both of these western paperbacks have been reprinted by Cutting Edge Books. Unfamiliar with the author, I chose to read Branded first.

Three years ago, protagonist Rock Kendall owned a large spread of acreage and cattle in Texas with a business partner named Ash Carlton. Unfortunately, greedy Carlton killed a young woman and framed Rock for the murder. Eliminating Rock from the business, Carlton had complete power and control of the ranch. Now, Carlton has expanded his empire into New Mexico using lies upon lies to prepare for a possible state political seat. Rock, a fugitive from justice, rides into New Mexico looking to clear his name and bring Carlton's criminal enterprise down.

Meinzer's writing is just superb as she uses the proverbial “cattle rustling” sub-genre of western storytelling to create an effective and exciting plot. Rock's quest for justice is riddled with obstacles, painful and deadly reminders that guilty until proven innocent was often the frontier's unfair justice system. Through a series of gunfights, fisticuffs and horse-chases, Rock carefully balances two possible love interests – one an untamed wildcat and the other a soft-spoken lady. The hero's twisting turmoil is center stage while Meinzer distributes possible allies and friends as support through the narrative.

Branded is delivered with solid storytelling that stays true to the roots of the genre. The lone hero's battle against the vile villain is a traditional concept - good versus evil in the mountains and plains of an unjust frontier. With its balance of romance and violence, Branded is sure to please western readers.