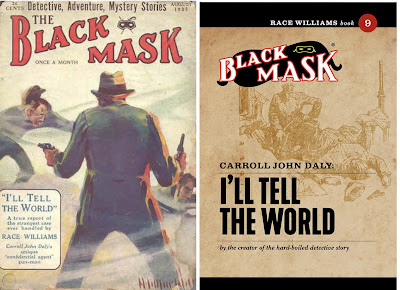 Carroll John Daly’s Race Willams character was the prototype used by Mickey Spillane for his hardboiled detective, Mike Hammer. For that matter, there’s more than a dash of Race Williams in Don Pendleton’s Mack Bolan. Race’s ninth adventure was “I’ll Tell The World,” a novella that originally appeared in the August 1925 issue of Black Mask and remains available today as a reprint.

As the story opens, Race is broke again and hoping for a new client in search of a “confidential agent” for hire. While browsing through the newspaper classified ads, Race sees a coded message that reads:

Race smells an opportunity to make some money and his decoding of the message sends him to a Manhattan street corner where someone else’s clandestine meeting is taking place Tuesday at 11pm. Hiding in the shadows, he witnesses a lone woman being abducted by two men who toss her into their car. Ever the stealthy sleuth, Race follows quietly behind.

The confrontation between the kidnappers and Race only serves to deepen the mystery and underscores the depravity uncovered by sticking one’s nose where it doesn’t belong. For her part, Dorothy the kidnap victim is filled with secrets and appropriately skeptical of trusting Race, the stranger who saves her.

The main mystery of “I’ll Tell The World” is: What chaos has Race stumbled upon here? Why the classified ad? Who are the powerful people behind Dorothy’s kidnapping? And what is their agenda? Without a paying client, Race pursues this because he is curious. Just like the reader. Eventually, his curiosity is rewarded with a paying client who engages him to investigate the matter.

And that’s where the story loses its way. Daly falls for the trap of many early 20th Century mystery writers and creates a confusing and labyrinthian plot that is hard to follow and a pain to read. Race’s swagger remains but the plot lost me at the novella’s halfway point. I’m not giving up on Race Williams, but this installment was a bumpy ride best forgotten.

Buy a copy of this HERE