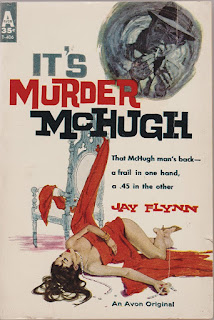 The McHugh series of American spy novels was a five-book series originally published between 1959 and 1962. The author of the McHugh books was a colorful, hard-drinking character named Jay Flynn (1927-1985). The first four books in the series remain available as affordable ebooks, including the second installment, It’s Murder, McHugh from 1960.

McHugh is a spy for the Pentagon who spends his time working in a San Francisco bar awaiting his next assignment from D.C. This case finds McHugh dispatched to Mexico to find two missing Navy pilots from the same jet squadron and a missing supersonic fighter jet. The Department of Defense doesn’t know if the men are alive or dead, guilty or innocent, and it’s McHugh’s job to figure out the truth.

The missing pilots are Nate Bramhall and Donald Long. Before they disappeared, they were both sharing the same woman, Nate’s wife Peggy. McHugh thinks that Peggy may be the key to this mystery as she recently drove to Mexico and has a history of radical leftist politics. When McHugh tracks her down in a small Mexican village, she’s changed her hair color and is otherwise acting quite squirrelly.

While in Mexico, McHugh is joined by his seaplane-flying sidekick and a freelance soldier of fortune with questionable loyalties. The search for the missing pilots and the jet uncovers a sinister Soviet plot with high stakes for Mexico - and the U.S. - requiring some expert thwarting. The author writes good action sequences, but he relies on seaplane travel way too much to push the messy plot forward.

As long as you control your expectations, It’s Murder, McHugh (a crappy title that doesn’t fit the book) is a fun way to kill a few hours. It’s slightly better than an average Nick Carter: Killmaster novel but nowhere near as good as the espionage fiction of Ian Fleming, Donald Hamilton or Edward S. Aarons. There’s nothing particularly wrong with this paperback, but it’s also nothing you should be eager to tackle.