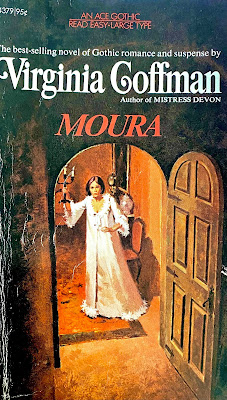 Like her contemporary in Phyllis Whitney, Virginia Coffman (1914-2005) was a cornerstone of gothic fiction in the middle of the twentieth century. The author was born in San Francisco and graduated from University of California, Berkeley in 1938. After college, Coffman worked as a fan-mail secretary and in public relations for studios like Monogram, RKO and Columbia. She eventually moved to Nevada and became a full-time novelist. She authored over 100 books, mostly gothic romance or gothic suspense. Her 1959 novel, Moura, is considered a highlight of contemporary gothic fiction. It has been reprinted numerous times and exists today in physical and digital editions. The bestselling novel also inspired four sequels.

The book begins in England in 1815 and stars an Irish woman named Anne Wicklow. Wicklow is employed as a housekeeper at Miss Nutting's Academy of Select Young Females, a type of boarding school. In the opening pages, Miss Nutting and three teachers are away, leaving discipline and schooling to Anne. One of her charges, Palla Florin, is from France and has recently arrived at the school. But, late one night her uncle, Edmund Moura, arrives at the school and notifies Anne that Palla is to be shipped back to her French home, the eponymous Castle Moura. Anne approves the request and shortly afterwards Palla leaves.

Weeks later, Anne begins receiving letters from Palla providing status updates. The letters begin on a positive note, but over time they become more desperate and darker. Anne, worried about Palla's health, decides to visit Castle Moura. Once there, she learns from Edmund and his servant Achilles that Palla has a lung disease and isn't at Castle Moura any longer. However, Edmund makes a lucrative offer to Anne to remain at the castle as the housekeeper. Unfortunately, she accepts.

Castle Moura is as dark as a mortuary drape. The Moura family is fairly disorganized so Anne spends a great deal of time exploring and cleaning the castle. But there's some weird stuff going on in the workplace. For example, there's packs of wolves that patrol the castle walls at night, prohibiting anyone from traveling after dark. A young servant is found dead and there are signs of a ghostly apparition haunting the dark corridors. Moura learns from a visitor that the preceding maid disappeared in the castle and that the Mouras may have been involved in her disappearance. When Anne makes a horrifying discovery in an upstairs bedroom, she learns that she may be a prisoner in this house of horror.

I really enjoyed this classic gothic tale. The central mystery of Palla's whereabouts is combined with Anne's own fear that something evil is lurking within the castle's walls. I found the surprise reveal quite satisfying and felt it really shaped the narrative going forward. Location, atmosphere and mysterious characters enhance the story, combining both horror, suspense and romance into a whirlwind of intrigue. I can certainly understand the book's popularity. Considering there's more to this story and its characters, I've already purchased used copies of the second and third installments.