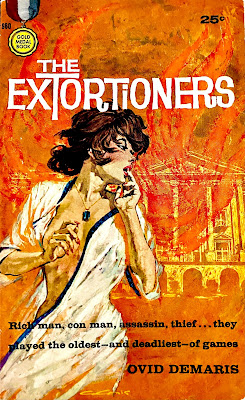 Ovid Demaris (1919-1998) wrote nearly 20 novels of crime-fiction as well as 14 non-fiction books about crime. The author has been reintroduced to new generations of readers with publishers like Cutting Edge Books and Armchair Fiction reprinting his work. The author's fifth career novel, The Extortioners, was originally published by Fawcett Gold Medal in 1960. Since then, it has been reprinted as an e-book by Hauraki Publishing in 2016 and by Armchair Fiction in 2019 as a double with Henry Kane's 1954 paperback Laughter Came Screaming.

Hugh Dewitt has endured many hardships and tribulations on the road to becoming a millionaire. Dewitt, who frequented gambling joints, experienced the loss of his young son in an auto accident. The insurance payout insured Dewitt's family for life, allowing him to invest and buy into the lucrative oil industry. Dewitt's friend and business associate is Neil Gordon, a man he trusts and confides in. Together, the two have grown a small empire.

In the opening pages of the book, Dewitt organizes a party in his large mansion. Angelo Rizzola, Dewitt's former bookie, learns about the party and appears uninvited. Both Dewitt and Gordon are shocked by his appearance, but eventually discuss old times over a few drinks. Angelo insists on investing in Dewitt' business. Hesitant about discussing business with Angelo, he volunteers that his company will be selling a 2% overriding royalty that pays about $5,000 per month. He cannot guarantee that it is still for sale and he has no idea if Angelo can even buy it. All Angelo hears is the payout and states he can come up with the needed funds.

Where does a criminal get a loan? The mob. Without any guarantee that he can even purchase the royalty, Angelo calls a dangerous mob organizer named Jimmy Gracio. Angelo explains the deal and Jimmy immediately says they can share the buy-in, although neither of them know the price. Jimmy has graduated from mob enforcer to organizer and now owns stock in multiple hotels and corporations. This is his chance to finally allocate funds to the oil industry. He tells Angelo to set it up. The problem? The royalty offer has already taken place and has been approved by the company for another person to buy it.

The author's extremely violent narrative begins with Angelo endlessly calling Dewitt's secretary asking for a callback. Next, both Angelo and Jimmy begin working on Gordon in person and by phone. After numerous threats, Gordon advises Angelo that he knows nothing about the proposed deal and that Dewitt was just saying anything at the party to get Angelo to leave. There's no royalty for sale and Angelo will need to chase another business venture. Angelo relays this to Jimmy and all Hell breaks loose.

Jimmy feels like a victim of discrimination and starts threatening Gordon and Dewitt. Once he targets Dewitt's family, the business associates make the unfortunate mistake of going to the police. The story breaks out into a crescendo of bloodshed and suspense when Jimmy starts using years of experience to extort the family. Is it possible for Dewitt to escape this fiasco alive?

Like Ride the Gold Mare, The Long Night and The Enforcer, The Extortioners is laced with brutality. Demaris was an expert on organized crime and pulls no punches in describing their threatening methods. In some ways this story reminded me of John D. MacDonald's The Executioners (twice filmed as Cape Fear). The endless physical and psychological abuse of attorney Sam Bowden and his loved ones by Max Cady is similar to this story, though MacDonald's novel was published three years before The Extortioners.

Aside from a mediocre novel here and there, Ovid Demaris was a rock solid crime-noir author. In my personal experience, The Extortioners is his best work. With two reprint options available, there's no reason you shouldn't be reading this.

Buy the e-book HERE and the paperback HERE