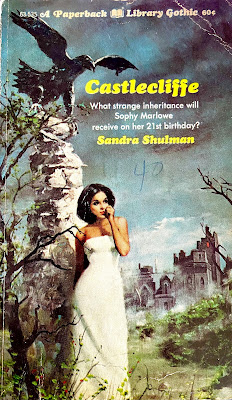 Sandra Shulman (b. 1944) is a British author who specializes in gothic and horror novels. Typically, her works involve evil sects, worshippers of Satan, and old deserted castles. Using the pseudonym Lisa Montague, Shulman authored three novels of historical romance for Harlequin Masquerade. The author also wrote a number of non-fiction books about astrology, dream interpretation and the punishment of women through history. I read a thread online that suggested that she also wrote novels for the television series Dark Shadows. My first experience with Shulman is her second career novel, Castlecliffe, first published by Paperback Library in 1967. The novel was later reprinted by the publisher with different cover art in 1971.

In 1798, the French politician and military commander Napoleon Bonaparte placed an army on the coast of the English Canal. The threat of invasion tormented the British for six years and was eventually rescinded as a result of France's conflicts with Egypt and Austria. It is this era that Castlecliffe exists, a historical period that peaked in fever as England seemed to await the "inevitable" invasion.

20-year old Sophy Marlowe has been a student in Brussels. Her father was killed in the Middle East and her inheritance comes to fruition on her 21st birthday. Upon specific instructions from her father, Sophy is to be placed under the care of her guardian, a close friend of her father named Eastlake, at his large manor called Castlecliffe on the English Moors. Sophy's father also makes it clear that he is not a fan of Eastlake's doctor and friend, Rashid.

Just on the outskirts of Castlecliffe, Sophy and her fellow passengers are attacked on a coach road by a highwayman named Midnight. This masked man has a brief fondness for Sophy and promises not to hurt her. When Sophy arrives at Castlecliffe, Midnight comes to her overnight and advises her to leave the castle immediately. He warns that it isn't safe to stay at the castle and that her guardian is a dangerous man. Sophy ignores Midnight's warning and proceeds with his stay. But the words of Midnight may have a ring of truth when she sees a man bent and disfigured lurking in the dark outside the castle.

Shulman's narrative introduces two romantic interests, a military captain who is smitten with Sophy and Rashid's young nephew. Both seem like safe allies, but again Midnight cautions her. The mysteries abound when Eastlake shows no interest in Sophy nor does he have any real information about her father. They were supposed to be best friends, so why doesn't he have stories or historical accounts of their time together? Rashid is also a mystery as a crazy scientist carrying out heinous experiments on animals. He often condemns Sophy and, at some point, seems intent on killing her. 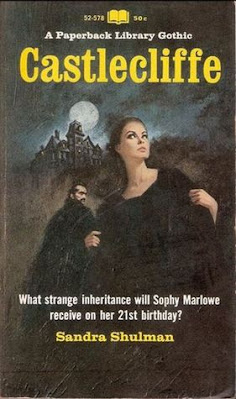 Like Shulman's other novels, the idea of a satanic sect arises when Rashid, the captain and a wealthy woman are found wearing rings depicting goat horns. They invite Sophy to join their "science club" but Sophy fears that the group is practicing some sort of witchcraft in secret. The greatest mystery may be the heritage itself. Rashid and Eastlake aren’t aware of any specific inheritance and her father's documents simply state that she will not collect any information about this inheritance until her 21st birthday. This date is November 1, usually a Gaelic holiday called Samhain.

Castlecliffe is a more of a horror story than a gothic one. The satanic panic inside the castle, strange creatures wandering through the countryside and the disfigured thing are all frightening and indicative of a traditional horror story. The romanticism of these three men (captain, nephew, bandit) coveting Sophy is a central concept, but it also provides a good dose of action-adventure. Midnight's fights with the English are exciting and I really liked the idea of Sophy dressing in disguise as a male. This is another staple of Shulman's writing. In her 1971 novel The Florentine, that book's main character disguises herself as a man to seek revenge. In addition, the idea of the French possibly invading England at any moment just adds to the tension.

If you enjoy gothics then you will surely love Castlecliffe. But beyond that, this is just a great story with an intriguing mystery, perfect pacing (it's a countdown to her birthday) and small ingredients of a selection of genres. With slightly less than 160 pages, the narration is a quick read with enough intensity to keep the pages moving. I urge you to find a copy.