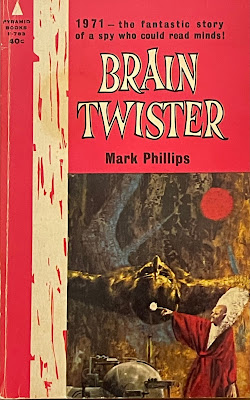 Brain Twister takes place in the distant future of 1971 where we join our hero, FBI Special Agent Kenneth Malone, nursing a hangover when he is interrupted by his boss summoning him to save America from a dire threat. Malone is 26 years-old and has been an FBI agent for three years. In that time, he’s cracked some pretty big cases and is regarded as the director’s secret weapon to combat this current threat.

The U.S government has conducted research involving telepathy, and has developed a machine to detect telepathic activity and mind reading. It’s like a smoke detector for psychic energies, but it doesn’t pinpoint who the psychic is or where he’s located. The machine just identifies that a particular individual’s mind is being read.

While experimenting with the new machine on a secret installation in Nevada, the scientists discover that someone is invading the brains of other scientists working on a highly-classified project involving space travel. The base has been penetrated by a telepathic spy, and the FBI needs Malone to ferret him out of hiding and neutralize him before U.S. government secrets fall into the wrong hands.

So what we have here is a pretty cool setup for a science fiction espionage mystery. The execution will be familiar to fans of police procedural crime novels. Malone embarks on a perfectly logical investigation utilizing FBI manpower to shag leads bringing him closer to the truth. Without giving too much away, he enlists the help of an unlikely ally in completing his mission, causing the book to veer into some wacky places.

There are some genuinely funny scenes and too many overly-silly ones. At times, it reminded me more of a Donald Westlake madcap crime caper than a hardboiled novel of the future. The solution to the mystery owed more to Sherlock Holmes-style deduction than psychic intervention. Overall, this old paperback was a lot of fun to read, and I’m looking forward to the second installment. Recommended.

The chronology of this series is a little confusing as the three novels were originally serialized in sci-fi digest magazines and then re-titled for paperback releases with no indication they were part a series.