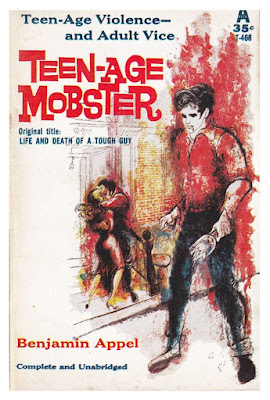 Benjamin Appel (1907-1977) grew up in Hell's Kitchen, NY, and attended the University of Pennsylvania and New York University. He authored over 20 novels between 1934 to 1977. Most of his crime-fiction involved the tough urban streets of New York City. One such example is the juvenile crime novel Life and Death of a Tough Guy. It was originally released in 1955 and republished by Stark House Press. In addition, Avon released the book as Teen-Age Mobster in 1960.

The book starts with the introduction of the main character, Joey Kasow, when he is four years old. He lives in Hell's Kitchen among the gangs and the criminal underworld of that era. Because of his speed, his father has him running errands throughout the city. But Joey, being Jewish, is at times taken by his peers and subjected to humiliating jokes and violent beatings. After running afoul of a young group of bullies, Joey takes his beating, but is later accepted by the pack. As the story progresses, Joey grows up with those children and establishes a street gang called 1-4-Alls.

At the age of 15, Joey and some of the 1-4-All gang join a larger, more violent gang called The Badgers. This group is run by small-time hoods that become a staple in Joey's life. These seasoned criminals turn Joey and his friends into small-scale robbers working in department stores. This involves training the kids on how to avoid the retail cops and how to make a swift grab by consistently displaying an innocent face.

Ultimately, Joey's rise to criminal superstardom involves the armed robbery of department stores and grocery stores. In January 1920, all bars and saloons of the nation were closed as a result of prohibition. The Badgers' gambling, whore and holdup money begin to seem elementary compared to the big bucks of running moonshine. Appel's narrative begins to tighten up as Joey Kasow becomes the gangster known as Joey Case. His rise to criminal stardom, his eventual struggles with a friend and former gang-associate Georgie and his love interest in a young woman named Sadie are all important elements of the story.

There's nothing not to dislike about this rags to riches story. It possesses many of the juvenile delinquent genre offerings of the era. As a biography of this fictional Joey Kasow character, Appel's narrative is often violent with historical references to Al Capone, Dutch Schultz and Thomas Dewey. If you like early mobster fiction or this notorious era of American history, I think you will enjoy Appel's novel. I'm not a huge fan of the run 'n gun 1920s and 1930s, so Teen-Age Mobster didn't quite grasp my attention as well as crime-noir novels set in later time periods. As a quick read, I mostly enjoyed it.