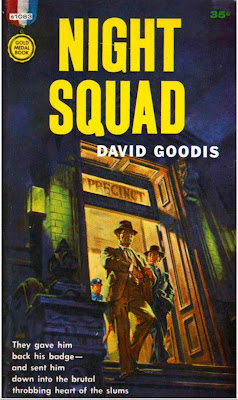 Philadelphia author David Loeb Goodis (1917-1967) wrote excellent crime novels about skid row losers rising above their alcoholism and misfortune to find justice and normalcy in their violent world. Although Goodis never achieved fame in the U.S. during his life, the French had a keen appreciation for his particular brand of noir. Night Squad was his 1961 paperback original from Fawcett Gold Medal that has been reprinted by Stark House Noir Classics as one of three novels in a trade paperback reprint.

Five weeks ago, Corey Bradford was canned from his job as a police officer for taking bribes from lawbreakers. After the death of his honest police officer father, he was raised by a wino mom in the skid row alleys he now calls home. As we join him, Corey is a boozehound stewbum sleeping on the streets of a city that’s never given a name. Goodis is a master at atmospheric descriptions of the slime-filled slum called the Swamp where rats crawl in the bedroom windows and gnaw on sleeping babies in their cribs. Yes, it’s one of those kind of novels.

The Swamp is under the thumb of a gangster named Walter Grogan, who hires Corey to figure out who is trying to kidnap him. There are several violent set-pieces where Corey is thrust into action trusting his wits and police training to save his own skin as well as his client’s hide. For his part, Grogan is a muscular 56 year-old athlete with a 24 year-old trophy wife who is hot to trot for Corey. If Grogan had any inkling that Corey and his temptress bride were up to anything, it’s a safe bet Corey would disappear to the bottom of the city’s lake.

And then there’s the Night Squad itself. They are a shadowy team of cops operating out of City hall beyond the strict boundaries of the law and police oversight. They are willing to reinstate Corey and return his badge in order to nail Grogan. There’s some great backstory explaining the Night Squad’s hard-on for Grogan that includes one of the most violent vignettes I’ve read in ages. Can Corey serve two masters and rebuild his life?

To be sure, there are a few slow sections, but mostly Night Squad is a pretty exciting, yet thin, paperback with some crazy-violent scenes, backstabbing, torture, gunplay, hot dames, a treasure hunt, and a shot at redemption. Upon reflection, it’s a nearly perfect crime-noir paperback and another win for Stark House, the imprint at the top of the reprint game. Read this one ASAP.