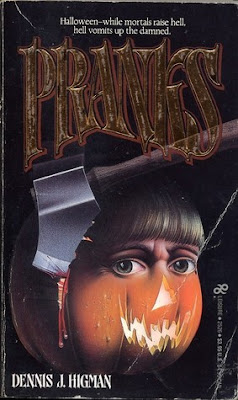 Dennis J. Higman is a relatively unknown author from Idaho. After a deep dive online, the only information I could gather is that he wrote the horror novel Pranks in 1983 and a romance novel titled Laura Jordan in 1987. I love Halloween and vintage horror novels, so I was excited to borrow my friend's paperback copy of Pranks. It was published by Leisure, and not surprisingly, it's a horror novel that takes place on Halloween night.

When the novel begins, residents of the small, cozy island town of Horsehead Point prepare for the night's Halloween festivities. There is a sense of isolation on the island, which is in Puget Sound off the foggy shore of Washington. It's here that young Bucky, Harry and Jeff are middle-schoolers running rampant on testosterone, boredom and a desire for reckless abandonment. While most of their misbehavior consists of a few Valium pills and nudie books, it is Bucky that proves to be psycho.

Despite Jeff and Harry's hesitation, Bucky ends up killing two elderly people on Halloween night. Higman's narrative showcases a police procedural that mistakenly rules the murders as accidents. But, Bucky's school teacher Jan feels that the child exhibits unusual behavior by drawing disturbing images of people being tortured. Once she talks with Bucky's mother, she learns that he has a history of psychotic behavior. Jan's father is also suspicious of the two deaths and feels that there may have been foul play involved

At a robust 431 pages, it's clear that Pranks could have been much shorter. I was hoping that this novel would possess some of the "killer kids" genre tropes of vintage horror paperbacks. While I was entertained, the idea of a child killing two elderly people and attempting to cover it up was not exactly a terrifying story. In some respects, Pranks may be more of a juvenile delinquent novel from the 1960s.

If you manage your expectations, Pranks is an enjoyable crime-fiction novel. The fact that the book's cover is themed for Halloween has no impact on the actual story. While I wish the book was trimmed considerably, I have no regrets reading it.