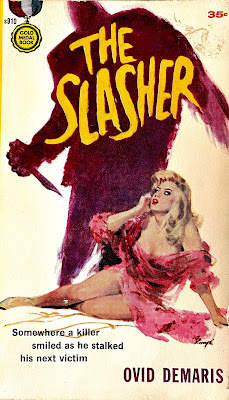 Ovid Demaris is a mid-20th century author who wrote both true crime and crime-noir. Most of his novels have been reprinted by publishers like Stark House Press and Cutting Edge Books. In recent years, I have read and collected his writing. Thankfully, a friend gave me a tattered copy of the author's Fawcett Gold Medal paperback The Slasher. It was originally published in 1959. As far as I can tell, it was never reprinted.

The novel introduces Stanley Palke, a psychopathic lunatic who terrorizes a Californian city. Palke is gay and has a fondness for naval men and merchant seamen. This "slasher" usually picks up men from local dives or bars and then brutally attacks them with a knife. In the first pages of the book, the police find four dead sailors trapped in a car immersed in water. These appear to be Palke's victims.

Whereas the novel occasionally presents events from Palke's point of view, most of the narrative is from Paul Warren's perspective. Like any "downward spiral" story, Warren has developed an alcohol problem. He ends up being fired from his reporting job due to his inability to stay sober for his newspaper assignments. Feeling as if his life is over, Warren spends his days drinking in bars and refusing his wife's help. The stars unfortunately align when Palke spots Warren in a local dive and offers to buy him a drink. Warren awakens the next day in the hospital after being brutalized by Palke.

The Slasher is mostly a crime-fiction book that highlights two homicide investigators attempting to locate Palke. As fun as that was, I think I enjoyed the more personal account of Warren's downfall. The fact that this suburban husband and father could socially and financially plunge to the depths of alcoholism and suicidal tendencies was riveting. While Demaris is mostly known for his books on organized crime, I felt he presented this emotional story in a way that was easily relatable to readers.

The Slasher also features some really mature moments that were shocking to me considering this is a 1959 paperback. Palke's flirtation with men wasn't something that was common in literature or film for that time period. While not terribly graphic, Demaris presents some material that was probably taboo or controversial at the time. At one point Palke insinuates that heterosexual men all have a homosexual tendency at one point or another. Warren's wife even reflects on a personal relationship she had with another woman. Beyond that, the sexual crimes were disturbing. Palke's stabbing was comparable to intercourse, each penetration becoming a sexual crescendo that eventually leads to castration. This is all pretty bold stuff for 1959. None of this is really illustrated with the book's cover. Instead, the artwork suggests that the killer is preying on voluptuous women instead of men.

If you like crime-fiction, there's no reason that you won't enjoy The Slasher. Considering all of the elements at work here, Demaris is able to inject quite a bit into a relatively short 172-page novel. From graphic violence, sexual innuendo, police procedures and the aforementioned "riches to rags" personal story, The Slasher is a multifaceted, enjoyable paperback.