Zorro #01 - The Curse of Capistrano (aka The Mark of Zorro) 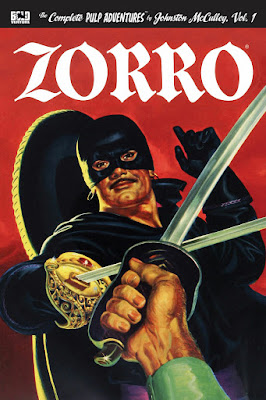 Johnston McCulley (1883-1958) was a prolific author for the pulps. He created characters like The Crimson Clown, The Green Ghost and Black Star. On August 9th, 1919, All-Story Weekly presented the first of five installments of "The Curse of Capistrano" (aka "The Mark of Zorro"). It was the first appearance by the Western hero Zorro. McCulley kept writing Zorro stories for decades. The hero became a phenomenon of pop culture with TV shows, movies and graphic novels all dedicated to the masked man.

In 2016, Florida's Bold Venture Press began reprinting all of the pulp adventures of Zorro. These have been compiled in 6 massive volumes. I'm staring with Zorro: The Complete Pulp Adventures Vol. 1. It contains an original serial "The Curse of Capistrano" plus two short stories, "Zorro Saves a Friend" (Argosy, 11/02/1932) and "Zorro Hunts a Jackal" (Argosy, 04/22/1933). In addition, two informative pieces are included regarding the series location as well as Zorro's appearances in cinema and television.

"The Curse of Capistrano" takes place in the early 19th century in California. This was before California joined the United States. As a result, the state was governed by Mexico. In the story, the Spanish missions and ranches are often terrorized by Mexican soldiers, notably Sergeant Gonzales and Captain Ramon. A masked man dressed in black and calling himself Zorro (The Fox) assists the people in their fight against the tyranny.

When Zorro helps a young woman named Lolita, the story starts to tighten. Lolita's parents have requested that she locate a proper suitor to marry. Don Diego Vega, a wealthy man living with his father, attempts to swoon Lolita and asks if she will marry him. The problem is that Lolita has her eyes fixed on the dashing Zorro and now her heart is beating for him. However, Lolita doesn't realize that Vega is Zorro. When Captain Ramon forces himself on Lolita, Zorro comes to the rescue, further emphasizing her attraction for the lone hero. Later, Zorro comes to the aid of his friend Fray Felipe while also being hunted by the Mexican army.

McCulley's story blends romance with action into a Western-style story. The dry and dusty Pueblo of Los Angeles is the perfect place, further enhancing Western themes. Zorro's mission to assist the downtrodden and fight government politicians is crucial to the plot. The first half was a bit slow but the second half was ripe with action, violence and a frantic pace as Zorro performs hit and run tactics through the city. It was interesting that McCulley doesn't reveal that Vega is Zorro until the end of the story. It's no surprise to the reader as there are so many clues that signal Zorro's identity.

If you are a dedicated Zorro fan or just a casual reader, this omnibus is essential reading. The thrilling adventures of this masked hero showcases everything we know and love about the pulps. Buy a copy of this volume HERE.