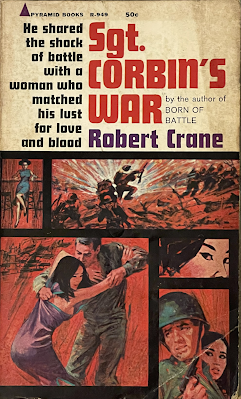 Among the over 100 books he authored employing a variety of pseudonyms, Con Sellers (1922-1992) wrote a six-book series starring a soldier-turned-CIA operative Ben Corbin under the pen name Robert Crane. The series debut was 1963's Sgt. Corbin’s War and it takes place long before the hero became a spy.

It’s late in the Korean War, and U.S. Army Sergeant Ben Corbin is an unusual asset for the military. Having been born and raised in Korea by American missionaries, Corbin speaks the Korean language fluently, has a keen understanding of cultural norms, and a spitting hate for North Korean commies. As such, he’s the guy chosen to interrogate North Korean prisoners of war, something he does with a cruel and torturous glee. He’s also an unlikely hero in the novel’s opening scene as he removes the fingernails of an enemy P.O.W. with a sharpened bayonet. Regardless of your opinions on torture, it’s a rough read.

Corbin has a pessimistic view of U.S. military leadership and believes that the war effort needs a hand-picked unit comprised of a few G.I.s and trusted Republic of Korea soldiers unbound by the red tape of a formal command structure. It would be a unit that could really take it to the NoKos without the handcuffs of the pesky Geneva Convention rules of war. He pitches this idea to a General who grants him low-key permission to form a unit to kill the enemy without any micromanaging. With that blessing, Corbin’s Invader Security Force is born.

As Corbin begins hand-picking his fighting unit, his first stop is a sexy Korean woman named Kim Chuni, who was a key figure during the resistance against the Japanese rule over Korea that ended in 1945. Nowadays, she’s a black marketeer and underworld figure. Her ostensible job in Corbin’s war unit is interpreter, but her real role is providing intel on the ground as well as having regular sex with Corbin. The rest of Corbin’s Army is Korean fighters and hard-case Americans with a distaste for authority and a taste for blood.

The battle scenes are vivid, violent and well-written. However, much of the paperback is dedicated to Corbin feeling deeply between the worlds of his Korean upbringing and his American blood. He’s also struggling with the legacy of a strict religious father whose evangelism left deep scars in Corbin. The overwritten trajectory of the romantic partnership of Corbin and Kim mostly left me cold as well.

Overall, Sgt. Corbin’s War was just okay. Our friends at Spy Guys and Gals website say it’s the highlight of the series. As such, I don’t see much need to dive deeper into the world of Ben Corbin.

Posted by Paperback Warrior at 6:05 AM

Email ThisBlogThis!Share to TwitterShare to FacebookShare to Pinterest
Labels: Team-Based