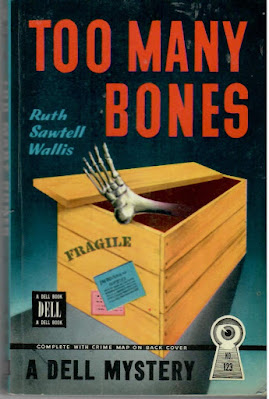 Ruth Sawtell Wallis (1895-1978) obtained her English degree from Radcliffe College in 1919. Later, she went on to graduate studies in anthropology and was employed by the University of Iowa. Wallis started writing mystery novels in 1943, often with her expertise in anthropology to improve her characters and stories. My first experience of Wallis is her first novel, Too Many Bones. It was first published by Dodd Mead in 1943 and re-printed by Dell in 1946. In 2020, Stark House Press reprinted the novel as two-in-one with her 1945 mystery Blood from a Stone.

Too Many Bones features a young anthropologist named Kay Ellis. In the opening pages, readers learn that Kay was referred to the small Midwestern town known as Hinchdale for employment. It is here that she will assist Dr. John Gordon with a unique research on famous bones at the Henry Proutman Museum. In the early 1920s, a large collection of ancient skeletons was smuggled out of Germany. Known as The Holtzerman Collection, these skeletons offer valuable insight into the culture and ancestral behavior of a village of mountainous Romanian people. In a rather bizarre turn of events, this famous bone collection was bought by a millionaire residing in this little rural town in the heart of America. Upon his death, his widow Zaydee Proutman inherited the museum.

When Kay arrives, the museum director is discouraged to learn that his new employee is a female. After some back and forth negotiation, Kay wins the job despite Zaydee's snobbish opposition. Over the weeks, Kay learns about the city - its quirks and subtleties - and her role as Gordon's assistant. As Kay and Gordon begin to have romantic chemistry, she discovers that Gordon and Zaydee are intimately involved.

In a local restaurant, Kay is repeatedly distracted by a drunk vagabond named Randy. He advises Kay that he was Zaydee's lover and that she threw his life into chaos and left him heartbroken and penniless. But, when Randy's charred body is found in a car, Kay looks like the most likely suspect. The rope begins to tighten when Zaydee goes missing. The readers know that Kay is not the killer, but the chauvinistic sheriff is determined to pin two murders on her. Is it possible for her to find the real killer before she's arrested?

The first half of Too Many Bones is dedicated to Hinchdale and its eccentric residents. It's also a fish out of water story as Kay attempts to settle into this small town. To Kay's chagrin, she is often delegated to the positions below her level of education as an expert in statistics and anthropology. Much of this is due to Zaydee, a pompous, bigoted and dominating millionaire who exists simply to spend her late husband's fortune. She's perfectly designed to be the instant villain you love to hate.

There are great characters in the storytelling, including touching and sincere attention to two African-American characters. It was rare for the period and a testament to Wallis as a warm and intelligent female author who fought for diversity. The central mystery, once developed, is similar to a cozy locked room mystery. There are suspicions, alibis, pointed fingers and fiery tension as Kay begins to analyze her colleagues, friends and neighbors. Wallis also displays a great sense of humor with some truly outrageous and funny scenes injected into the twisted narrative.

Too Many Bones is a fun murder mystery in a little town with endearing characters and a captivating storyline. Although it was published in the early twentieth century, forensic science and the use of anthropology are parallel to today's crime fiction. Wallis was ahead of her time and Too Many Bones exemplifies that.