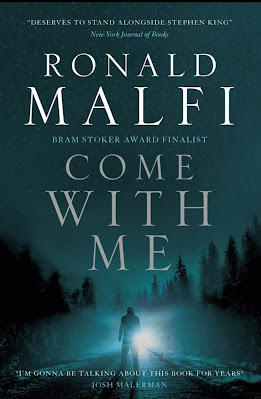 Come With Me is the latest novel by horror fiction author Ronald Malfi. For this selection, he steps away from supernatural fiction to present the reader with a story of human grief and loss unfolding within a “hunt-the-serial-killer” procedural mystery.

Our narrator is Aaron, a man who discovers that his deceased reporter wife - her name was Allison - was secretly on the trail of a serial killer. For reasons he doesn’t understand, Allison’s amateur gumshoe work was kept a tight secret from Aaron and others in her life. Learning this does little to heal the crushing grief and loneliness Aaron feels for his bride’s death. After all, they had an awesome marriage. Why would she keep this obsession a secret?

Aaron takes up the hunt to learn more about his wife’s hidden infatuation and becomes enmeshed in the maniacal mystery himself. I would compare Come With Me favorably to the work of Harlan Coben or Linwood Barclay in which secrets of the distant past are brought to light by an everyman in the present.

The first half of the book is a slow-burn, but Malfi is an excellent and vivid writer, so the reader is never bored. The second half speeds up quite a bit as our narrator begins putting the pieces together and approaches a solution. At 400 pages, it could have used some trimming and would have been more impactful at a lean 300 pages.

There was a whole sub-genre of serial killer books after Thomas Harris’ Silence of the Lambs, and Come With Me can be counted as a late-entry in that category. Would-be amateur sleuths and fans of the current true crime podcast craze will also find themselves in familiar territory with this novel.

Overall, there’s nothing here not to like. The writing was superb. The protagonist was likable and sympathetic. The mystery’s solution and climactic ending were both very satisfying. It’s an easy recommendation for fans of contemporary suspense and mystery fiction.