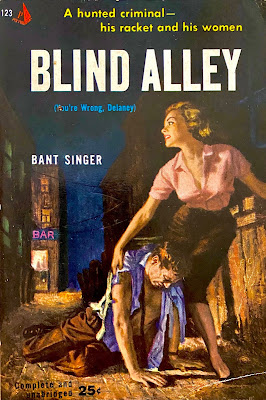 Charles Herbert Shaw (1900-1955) was an Australian journalist and author. In 1952, Shaw's first novel, Heaven Knows Mister Allison, became an international bestseller and he sold the film rights to Eastern Film Enterprises, Inc. In 1953, Shaw used the name Bant Singer to write You're Wrong, Delaney, the first of four novels starring a drifter named Dennis Delaney. The book was published as a hardcover by Collins in Europe. In the United States it was published as a paperback by Pyramid as Blind Alley.

Delaney is a card sharp that has ran pool rooms and small gambling circuits for a number of years. As a WW2 veteran, he can run roughshod over any players that become drunk or out of line. For the last year, Delaney has been working for a criminal named Martini. As the book begins, Delaney has fled to a town 100-miles away in Black Springs. It's here that he's being questioned by a police detective named Keough about his possible involvement in Martini's slaying. Delaney explains that he had a physical struggle with Martini's right-hand man, Peters, but that beyond that he has no knowledge of this man's death.

Keough, who is immediately likable, lets Delaney go under the strict rule that he cannot leave Black Springs while the investigation is still underway. Hard up for a dollar, Delaney finds the local pool hall and chums around with a man he calls Fats. Fats leads him to an illegal gambling scene where Delaney has Fats use loaded dice to win the duo a wad of cash. But, when Fats tries to leave with the money, Delaney tracks him into an alley. It's here that Fats is lying face down in what appears to be a drunken blackout. Delaney grabs the money and an envelope and heads to a hotel room. In the morning, he learns that Fats are dead. Now, Keough could possibly pen both Martini and Fats on Delaney.

With 190 pages of small print, there's plenty beyond Delaney just trying to clear his name. He falls in love with a maid named Kathy while trying to extort money from a bride named Elaine. Fats were having an affair with the woman and that valuable information was found in the envelope. For 500 bucks, Delaney won't say anything about the affair. Otherwise, Elaine's husband will be notified.

Shaw's writing style is really catchy. He writes it in the first person, but Delaney's narrative is more a story. According to The Australian Dictionary of Biography, Shaw wrote in a 'terse and laconic prose. It's really clever and funny with Delaney's downtrodden perspective on life and his experiences. While the series is described as being "detective-fiction", I can't really imagine Delaney as a detective. I'd like to obtain the other books in the series just to learn what Delaney is actually doing with those books. He's not a cop or a detective, more like a con artist similar to Frank Gruber's Johnny Fletcher. But for now, all I have is just this series debut and I thoroughly enjoyed it.