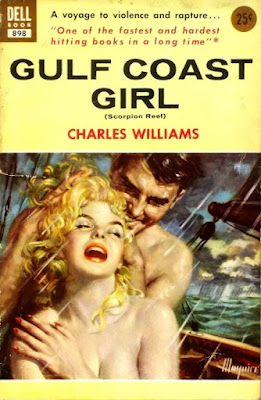 Gulf Coast Girl, by Charles Williams, has a rather complicated publication history. The novel was released in condensed form in the September 1955 edition of Manhunt under the title "Flight to Nowhere". That year MacMillan published it as a hardback entitled Scorpion Reef. Pan published the paperback version under that title in 1958. In 1955, Dell published the book as Gulf Coast Girl with cover art by Robert Maguire. Dell then reprinted it again under that title in 1960 with cover art by Robert McGinnis. In 1972, it was reprinted by Pocket Books as a paperback titled Scorpion Reef and currently it is that title as a $4 ebook offering through Mysterious Press.

Bill Manning is a 33-year old salvage diver that attended M.I.T., served in the U.S. Navy and authored a few adventure stories. While working in the little town of Sanport, Florida, Manning is approached by a young Scandinavian woman who presents herself as Mrs. Shannon Wayne. She wants to hire Manning to dive in a lake to retrieve her husband's lost shotgun. Manning accepts the job, but is skeptical of her real intentions.

At the rural lake location, Manning locates and returns the shotgun, but knows it was a setup. Mrs. Wayne, who is really Mrs. Macaulay, is attacked in the lake house by three men seeking her husband. When Manning defends her from the assailants, the whole story starts playing out.

Mr. Macaulay is a salvage insurance underwriter that stole $750,000 in diamonds from a shadowy criminal enterprise. That crime-ring is led by a smooth operator named Barclay. While attempting to escape by plane, Macaulay ends up crashing the plane into the ocean. He escapes with his life, but the plane, and the diamonds, sink into a big area called Scorpio Reef. The Macaulay couple has been on the run from Barclay for months.

A few high-tension events happen that lead to both Barclay, and his cohort Barfield, forcing Manning and Mrs. Macaulay to sail them to Scorpion Reef. Using Mrs. Macaulay's knowledge of the aircraft's vague location, they will force Manning to dive for the diamonds. Once the diamonds are found, Manning and Macaulay will be killed and the criminals will win back their stolen wealth.

Providing more information on this story would be a disservice to those of you who have not read it. This was the author's first foray into nautical adventure and serves as a precursor to his novels like Aground (1961), Dead Calm (1963) and And the Deep Blue Sea (1971). However, Williams cut his teeth on crime-noir novels that typically featured sexy female accomplices lulling an innocent man into the jaws of unlawful violence. This is the central feature that makes Gulf Coast Girl so exciting.

The author's twisted narrative is interwoven with violence, sexual chemistry and this thick and disturbing feeling that something very bad will happen to these characters. Barclay's lethal threats, enforce the fact that this nautical voyage is indeed a one-way endeavor. Because of Williams' excellent character development, I really cared about the fate of these two admirable characters and felt touched by the emotional love story embedded in the crime-noir.

As an exhilarating nautical adventure or a straight-laced crime-fiction novel, Gulf Coast Girl is such a pleasure to read. Charles Williams was a master storyteller and this novel showcases that talent tenfold. Highly recommended.