Where Are the Children? 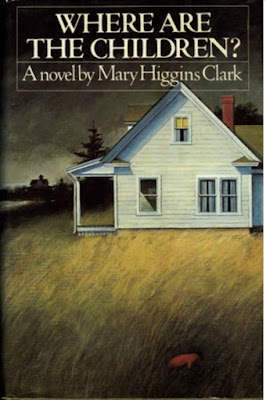 With decades of bestsellers, Mary Higgins Clark (1927-2020) was considered the queen of suspense. Of her 51 novels, the majority contained women in precarious situations, both physically and emotionally. In 1964, she began writing four-minute radio scripts before expanding into novels. Her first book, Aspire to the Heavens, is a fictional account of George Washington's life. After that flopped in 1968, she transcended into the suspense genre. Her second novel, Where Are the Children?, was published in 1975 as a runaway best-seller.

Years ago, young California native Nancy Harmon was arrested for allegedly smothering her two children in the backseat of her car. After their bodies were dumped in the ocean, a sensational trial swept the nation. In court, Nancy's character became questionable and a key witness, one of her husband's students, would have been the condemning voice. After jury members were overheard in a restaurant declaring her guilty, a new trial was ordered. The key witness surprisingly skipped town and was never heard from again. Nancy was never convicted, her husband committed suicide, and then she disappeared out of public view.

Now, decades later, Nancy has a new life in the quaint coastal town of Cape Cod. It's here that she's married to a real estate broker named Ray. The couple have two young children and are living a blissful, uneventful life. Besides her husband and one of his sales agents, the town isn't aware that Nancy Eldredge is the same Nancy Harmon that became a media sensation years before.

In the opening pages of the book, readers learn that a psycho has leaked the secret surrounding Nancy Eldredge to the local paper. However, his request was that the local newspaper holds the story until her birthday. Clark's novel takes place on the day of Nancy's birthday, a heartbreaking 24-hour thriller. Not only did the psychopath plan to leak the story to the press, he also planned to kidnap her two children in a sadistic repeat of the shocking events from years ago. When Nancy discovers that her two children have disappeared from the backyard, chaos ensues and the whole town wonders where the children are.

Admittedly, I was skeptical to read a novel by Mary Higgins Clark. Throughout my childhood, I remember my aunts and grandmothers reading her books and would often see the overly dramatic commercials for numerous television adaptations. Despite my recent obsession with gaudy gothic paperbacks, I still believed that Clark may just be a bit too hokey for me. I now realize I did Clark and her fans a serious disservice. Where Are the Children? is fantastic.

The novel certainly has a surplus of suspense, but it also has everything that readers of detective novels will be able to profit from. The likable town sheriff plays an important role and provides the appropriate procedural techniques under the most unfavorable conditions. With an ice storm obstructing the investigation, there are intense interrogations, detailed manhunts and roadblocks to keep the characters and readers busy.

I also thought the mystery of Nancy's entire life was absolutely fascinating. She had more information on the death of her family in California, and this element is cleverly concealed for most of Clark's story. That trial's mysterious key witness also plays a large role with an extortion gamble similar to a good mid 20th century crime-noir. Who is the psychopath, what is his relationship with Nancy and will he succeed are all questions that consume the central framework of the book.

Despite all the preconceptions you have about Mary Higgins Clark, you really need to read one of her novels. I strongly recommend Where Are the Children? But beware, it's violent, disturbing, scary and a consuming page-turner.