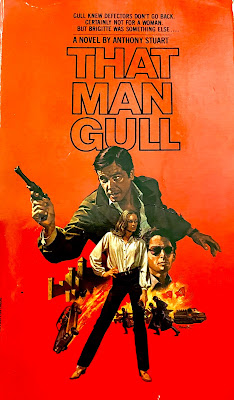 In detective novels, there have been instances where the protagonist was not necessarily a private investigator. In these stories, the characters can work as a newspaper reporter (Night Extra), accountant (Steve Bentley) or lawyer (City Limits), but still display the same features of a hard boiled detective. The same can be said for the espionage genre, with professions like arms-dealers (Your Friendly Neighborhood Death Peddler), bank-robbers (Earl Drake) and private-eyes (Chester Drum) submerging themselves into the global spy industry. That formula applies to Vladimir Gull. This was a six-book series of novels starring a freelance language translator authored by Anthony Stuart. The books were originally published in hardcover and then reprinted as paperbacks by Fawcett Popular Library beginning in 1981. I'm starting at the beginning with the series debut, That Man Gull.

Vladimir Chaikov was a soldier in the Russian Red Army before defecting to England in the late 1950s. Now, as Vladimir Gull, he's a freelance language translator that often accepts assignments working for the United Nations. In the book's opening pages, this is where readers find Gull. He's working in a small sound booth at a global meeting for foreign powers. Each country's chosen representative or leader is wearing a headset with their understood language being fed in by the interpreter. When Gull finds a gun to the back of his head, he's forced to relay a Soviet Union message to the English speakers. In the message, which is heard by China (for some reason), Gull relays that the Soviet Union and the United States have reached a peaceful agreement based on their concerns over China. Gull is then forced to read a list of war crimes committed by China before finally being knocked unconscious.

Upon his awakening, Gull learned that most of the hostilities had abated and that China had been informed of the false message. But, Gull has a suspicion that his former lover may have something to do with the scheme. The idea is that the message may intrigue China enough to purchase stolen Russian information. Stuart's narration puts Gull in Bucharest in search of that woman. On the way, he gets laid, chases a former CIA agent and avoids any action that could make That Man Gull interesting.

Stuart's writing is similar to that of Howard Hunt in that the novel contains extensive descriptions of European specialties, wines and culture. The writing is good, but there is simply not enough history here to enable Gull or his lovers to produce anything engaging for the reader. Often, I ended up counting the pages or jumping through long sequences of dialogue that have no impact on the story. At 220 pages, the book is likely 70 pages too many. Despite the cover of the book, the "hero" does not like firearms and at one point holds one, but is not familiar with it to actually use it. He even appears excited when he loses his weapon. These are not attributes that give me hope that the other five books are any better.